A Cut Above the Zest

As the temperatures start to warm, there is a phenomenon that seems to grip many of my fellow gardeners. It is also one that scares many of them at the same time.
The dreaded Pruning of Citrus Trees.
I have had numerous e-mails and phone calls as to when you should prune them, how to prune them, do I think it is needed, etc. I know you should not answer a question with a question, but I usually just have one. Why do you want to prune it?
Citrus trees do not usually need regular pruning to remain productive and they are usually allowed to develop on their own. They have an attractive hemispherical shape, without the help of man. Besides, when you are cutting off branches,doesn't that mean you are cutting off flowers, which is cutting off fruit?
The basic definition of pruning is: The cutting off of plant parts in order to develop a certain shape, and to remove dead, diseased or badly placed branches.
Let's start with the easy ones.
Dead or Diseased branches. This is kind of a no brainer. If the limb or branch is dead, why leave it on there? It is taking up space, looks ugly and isn't doing anything anyway. So get it out of there. As for diseased branches, again, no brainer. It more than likely is not producing good fruit, if at all. Probably has wilted leaves or just doesn't look good and, it is harboring a disease that could and will infect the rest of the tree.
A good candidate for pruning might look something like this: 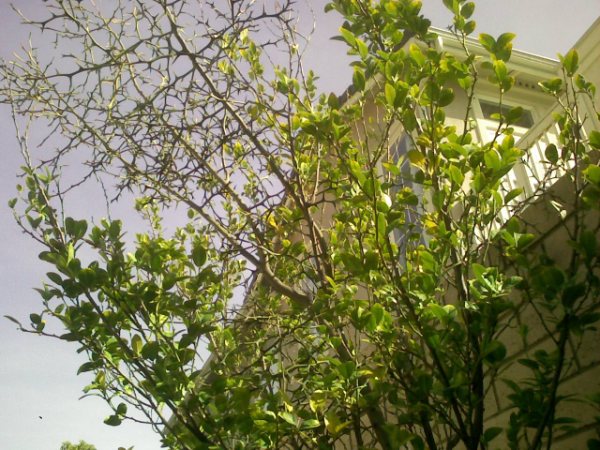 I would make sure that there was not some other underlying problem here. The leaves may have been eaten off by an insect or something else. Check it for life and disease before just hacking away.
Along these same lines, you will want to look for branches that are crisscrossing each other. Cut the weaker looking one out. The theory behind this is, the branches will rub together in the wind, rubbing the bark off and allowing a perfect access point for insects and diseases.
I mentioned badly placed branches. This is where proper plant in proper place can come into affect. Citrus trees lend themselves to be "limbed up". That is, basically made to look like a tree. It is much harder to get to the fruit that way, but it can be done. So if you want it to be next to a sidewalk or driveway, no problem. Badly placed branches would include, too close to the house, interfering with a power line, or maybe blocking a view. In these cases, you would want to cut out the offending branches. The tree might look lopsided unless you did the same thing all the way around.
With all this being said, they do use large machines to prune Citrus trees in commercial groves on a regular basis. The reason being is more of a safety and financial situation. It is much easier to reach the fruit on a shorter tree. Yes, I know, the same can be said for the homeowner. I can argue both sides of this one. You might only have to climb up and down a ladder on say three trees, imagine having to climb a ladder up and down on 500 trees?
One other thing before we move on here,Citrus trees can also be sheared regularly as a hedge or trained as an espalier and still produce some fruit. As you can imagine, it will diminish the size of the crop if you go this route. Okay, that is more for the aesthetic reasons for pruning. What about after a really hard Winter or freeze event? While it might be a great temptation to cut off frozen or apparently dead branches, the time to prune that unsightly mess is after the first flush of Spring. Researchers in Florida have found that trees pruned after the first flush of growth recovered more quickly and grew more vigorously than those pruned right after the freeze. Often what will happen is, the leaves on freeze damaged limbs may grow but then will soon wilt. If you wait until after the Spring flush, you will have a better idea of just how much you need to prune off.
There is one more situation of pruning that I would like to bring up, it involves the rootstock. Many Citrus trees are grafted onto a different type of Citrus tree than what the fruit is. An example might be a Navel Orange is grafted onto a Sour Orange root system. There are many reasons why this is done and that would make for a good blog sometime in the future, for now, just follow me on this.
While the top part or Scion is growing, the rootstock or root system is mad because they wanted to continue to grow too, so, they send up new little suckers. Many times they look like this: 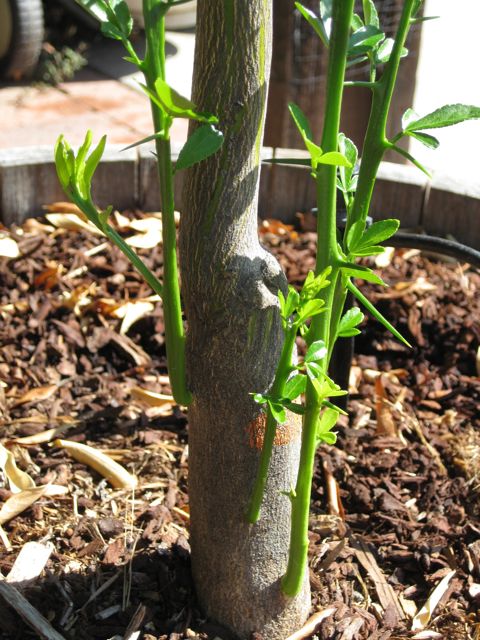 You can clearly see where the graft is, the dog leg like growth. The rootstock is sending up new shoots from beneath the graft line. You will want to stay vigilant and cut these off whenever you see them. There are a few reason. First, they are draining energy from the tree itself. Second, you can allow them to grow, but it will make for an ugly, bunched up tree. Third, when they do produce fruit, more than likely you will not want to eat it. There is a good chance that it will be a Poncirus species and the fruit of that type is....well, let's just say, unless you enjoy the taste of kerosene, you will not want to eat it. The running joke is, it tastes like you are being poisoned, but you are not.
I kind of eluded to the best time to prune earlier. Basically, after the danger of freezing temperatures is past and just after the Spring flush for freeze damage. If you are doing it for looks or bad placement, you will want to do it before the initial flush of growth. If there is any doubt as to whether there is freeze damage or not, then just wait until after the flush.....either way you are NOT going to harm the tree, unless you do like my Grandfather always did. He would start by just taking a little off something he was pruning and before long was at soil level.
The question often arises during this time, "I have this one really vigorous shoot that is coming out of the top of the tree, can I cut it off?" This often creates an unkempt, out of balance appearance. These can be cut off with no ill affects.
There are probably other reasons that a Citrus tree might need to be pruned that I have not encountered or thought of. If you have such a reason and need some advice, please let me know,I will help you as much as I can and I can pass the solution on to others that might have the same situation.
I would be totally remiss if I did not leave you with a little bit of a safety precaution. Before you prune any of your Citrus trees, you might want to invest in some nice thick gloves, a long sleeved shirt and some protective glasses. You might also want to consider a hard hat. Some of these things have some really sharp thorns and getting skewered by one is a painful experience you will not soon forget!!

Happy Growing!
Darren
Posted by Darren at 9:32 AM 3 comments: