One of the nice things about being a Master Gardener is, I get to work all kinds of events and meet all kinds of people. Sometimes we get really off the wall questions like, "Do I need bees to produce flowers on my Citrus tree?" or they will bring us a plant to identify. I have actually had today's topic asked of me twice in the past dozen or so days, so I thought I might bring it to the forefront. One of the questions was, "Do you know what that plant is growing on the wall in front of Dunes West subdivision?" Luckily, I drive by there rather often and I did know. The other question pertained to the fruit that it produces, but I am getting ahead of myself. That plant on the wall is Ficus pumila, better known as Creeping Fig. It also goes by climbing fig. You have probably seen it a million times and never really paid it any attention. 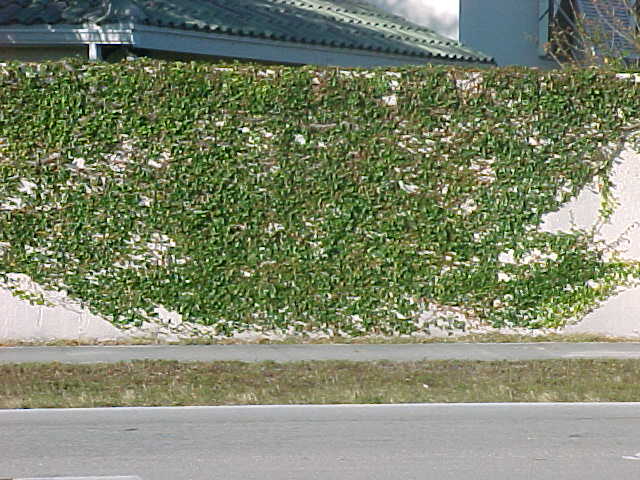 This is a fast growing, aggressive, but beautiful evergreen vine. It is a relative of the edible fig, Ficus carica, but it looks very little like its cousin. Creeping fig is native to East Asia and is found on Japan's southern islands, eastern China, and Vietnam. If you are looking for a good southern ground cover or want to hide an ugly wall, this is the plant for you. As the common name 'Creeping Fig' indicates, the plant has a creeping/vining habit and is often used in gardens and landscapes. Beware though, it can become invasive and cover structures and landscape features if not maintained in check.

While this may be pretty, you should also know that, when it is climbing on buildings or wooden structures, the woody tendrils can 'Cling' or 'Root in' and damage structures and/or their surface finishes. There has also been cases of top-heavy plants peeling away from the side of houses, it literally peeled the paint right off the wall.
Okay, let's say you have an old brick wall that separates you and your neighbors. It is ugly and you want to hide it, you really want to remove it but that is not an option. Plant some of this stuff. Creeping fig is not particular about soil. It's less aggressive and easier to manage when its grown in less fertile, drier soil. It prefers a little shade, but will do just fine in full sun. When it is young give it a little supplemental water, once it is mature it is very drought tolerant. When young, the leaves are heart-shaped, and small. They get larger, becoming 2-4 inches in length,oblong and leathery when mature. It is rated for Zones 8-11. It will tolerate freezing temperatures for short durations. If you live in a climate where it is too cold in the Winter, it can be propagated by cuttings. Just dust the end with rooting hormone powder, stick it in some potting soil and then place it in a warm, humid environment. Treat it as a houseplant until next Spring. There is even a Variegated version. 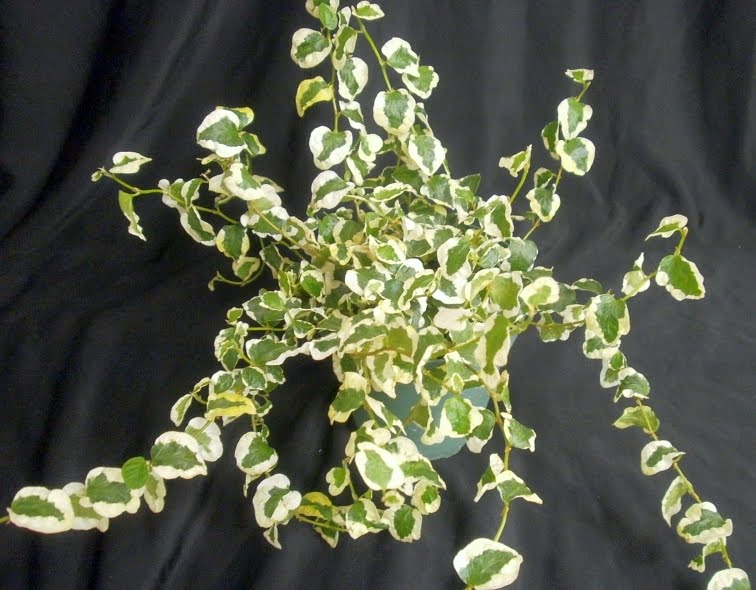 I mentioned at the top of this article that one of the questions pertained to this plant fruiting. It does, but it is a rare occasion. It looks like this.

Apparently there are numerous cultivars and some of the fruit can get very large. In Taiwan, its fruit is turned inside out and dried. The seeds are scraped off and a gel is extracted from their surface with water. It is allowed to set until it forms a jelly known in Taiwan as Aiyu Jelly and in Singapore it is known as Ice Jelly. I am not sure who thought to turn the fruit inside out, dry it and all that other stuff, but I am sure it was somebody really bored. I mean come on, "Hey Dude, lets turn this thing inside out and see what we can do with it". Would YOU know what to do with something that looks like this?!?! Happy Growing!
Darren
Posted by Darren at 11:18 AM No comments:

Hopefully you will already be doing the basics of today's post, but I thought it would be a good idea to tell you WHY you should do it and make sure that you ARE doing it.
It has been a pretty warm Winter, no complaints here, so this could be a bad year for this topic, Camellia Petal Blight.
Here in my Zone 8 Camellias have pretty much petered out, but there are still things to do to alleviate headaches for next year.
Let's start with the basics.
Camellia petal blight is caused by the fungus Ciborinia camelliae. All cultivars of camellias are equally susceptible to this disease. Camellia sasanqua is less so because it's bloom time is in the Fall. This disease only affects the flowers, not the roots, stems or leaves.
The development is favored by frequent rain showers, high humidity, and mild temperatures during bloom. Kind of sounds similar to the Winter we had this year, doesn't it?
Usually the disease is introduced into the landscape on already diseased plants.
The simple scoop is, Camellia petal blight causes blossoms to rot and drop prematurely. 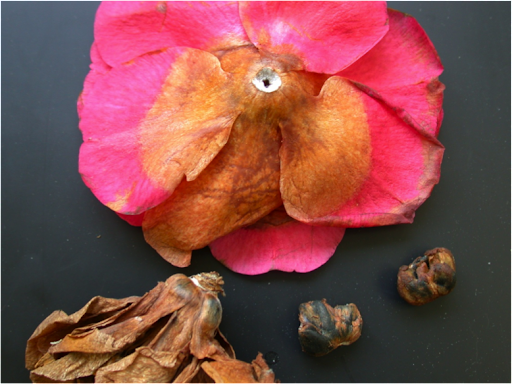 I know what you are thinking, "Flowers rot and drop off after a certain length of time and that is all that this is". And you would be right, except that this happens right after opening and they should stay on the plant for days. Another difference is, the blighted petals are dry and leathery but do not crumble when handled. Petal blight can also be confused with cold injury, but cold injury is usually found on the outer petals, which become dry and crumbly and do not fall from the plant. Flowers from the same plant can have petal blight and cold injury.
The disease is first seen as brown spots on the expanding flower petals. In the early stages of the disease, veins within the spots appear darker than the surrounding tissue, giving some blooms a distinctive netted appearance.
That looks like this: 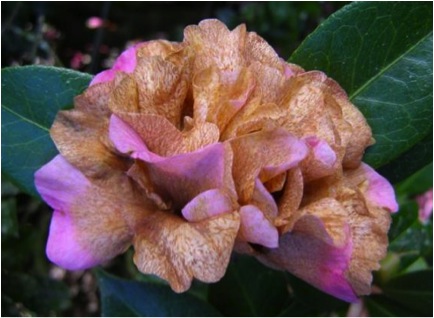 These spots, which began as small brown specks, enlarge rapidly during warm weather as the fungus invades and kills the flower tissue. A gray or white fuzzy growth may be observed at the base of the flower where it attaches to the stem. (See the base of the flower in the first picture) Eventually the fungus invades to the flower base where a hard, black structure called a sclerotium forms. (Again see the first picture, lower right hand corner) These sclerotia can persist in the soil for several years. Under favorable conditions (cool weather followed by warm, wet weather), the sclerotia germinate to produce tiny mushroom-like structures. The “mushrooms” produce airborne spores that land on nearby camellia flowers, starting a new cycle of disease.
Once introduced it is almost impossible to rid your landscape of this disease. There are things you can do to slow it down. Make sure you don't introduce it to begin with. Check the plant you are buying. If it is flowering, look for the brown specks on the flower. If not, look at the soil and see if you see any of the sclerotium laying there.
If it is has been introduced and you are already dealing with it, watch carefully and collect and destroy all diseased blooms on and beneath the plant.
Each Spring, remove the old mulch. Then spread a layer of about 1 inch of fresh bark, pine straw or whatever your favorite mulch is around the base of each Camellia. The mulch will interfere with the spread of spores to the flower buds. Be sure not to over-mulch the Camellia; burying the root system under 2 or more inches of mulch may kill the plant. Also remember to keep it away from the trunk of the plant to stop other problems from arising.
Along with these sanitation practices, you can apply fungicides. Make sure you read the label and it has Camellia listed. Follow the directions to the letter, this is the law! There are also some soil drench fungicides that can be applied to get any of the spores that may be hiding there.
The fungus may also be spread by the distribution of diseased flowers. This is the reason that at Camellia shows ALL flowers are suppose to be destroyed at the end of the show. You will want to remember not to add camellia petals or leaves to any compost that will be used around Camellias. Most home composts do not get hot enough to kill these sclerotium and you could just be re-infesting your Camellia bed.
Hopefully you have been practicing these types of sanitation tips already. This actually can apply to many kinds of fungus and diseases of plants. If a plant dies and you are not sure why or know that it died due to some illness, better play it safe and burn it or dispose of it in some other manner OTHER than your compost bin.
SO, If you look under your Camellia bushes and you see this: 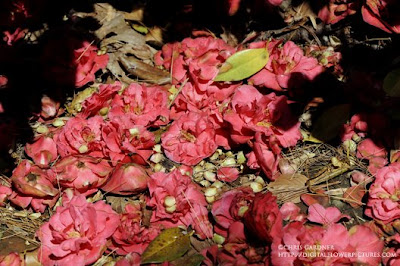 You might be asking for trouble and end up with this: