Every year there seems to be a different insect or other critter that comes into my yard and gives me headaches. Some years it is Aphids, (actually almost every year for this one), Mealies, Whitefly, Deer, Opossums, even Japanese Beetles only seem to raise their ugly heads occasionally. This time the culprit is higher in numbers than I have ever seen.....Do you recognize this insect? If you guessed Leptoglossus phyllopus or Eastern Leaf Footed Bug, you would be correct!
Apparently many people are having a problem this year. Could it be because of the past mild Winter? Let's learn about this problematic pest.
Leaf footed bugs' common name comes from the hind legs that have a flattened, leaf-like expansion, you can see it in the above picture.
It is a very common insect in the Untied States, there are reported sightings as far north as Long Island, New York, and then they range south to Florida, west to Iowa and Kansas, and southwest through Texas to California.
Adults are about 3/4 inch in length and are dark brown with a whitish to yellowish stripe across the central part of the back. The nymphs have much the same shape as adults, though they are usually a bright Orange and do not acquire the flattened leaf-like hind leg until they are almost full grown adults.

This pest has a wide range of plants that it likes to attack including: apple, bean, bell pepper, blueberry, blackberry, citrus, cowpea, cucurbits, eggplant, lychee, loquat, okra, peach, pear, persimmon, plum, pomegranate, potato, tomato, and sunflower....just to name a few.
Leaf footed bugs have piercing-sucking mouthparts. They stick the piercing part into their food material, use their saliva to dissolve the contents and then suck up the digesting mixture. Then as the puncture heals, the feeding site becomes hard and darkens. Damage early in development of the fruit or vegetable can lead to it falling off or at the very least cause severe deformities.
The Leaf Footed Bug can be controlled!!
With application of insecticides, cultural practices, a little help from Mother Nature and by hand picking.
The last one is obvious, pick the little buggers off by hand and either drown them in a bucket of soapy water or squash them.
Cultural controls include, keeping the weeds down in adjacent fields and replacing the mulch around your yard every year. They like to over Winter there.
Mother Nature might give you a helping hand, there are some species of birds that will eat Leaf Footed bugs. There are also some Parasitic wasps that attack the eggs and parasitic flies that attack the nymphs and adults. Some other helpers include: big-eyed bugs (Geocoris spp.), damsel bugs (Nabis spp.) and spiders.
I saved the Chemical control for last because hopefully that would be your last resort. If the threshold of damage to your crop has been reached then it is time to reach for the bottle. The insecticides used most often to control these bugs include the pyrethroid insecticides, carbaryl and endosulfan. Look for these ingredients on the label. Then make sure that what you want to use it on is also listed, i.e. Tomatoes, Citrus, Sunflowers, etc. The label is the law!!
A few side notes to keep in mind when confronting Leaf Footed bugs. They are very skiddish. The adults will fly away when disturbed, but will quickly return when the disturbance is gone. The nymphs will try to run away and hide on the other side of the plant.
You may also notice that the really like to hang out together. 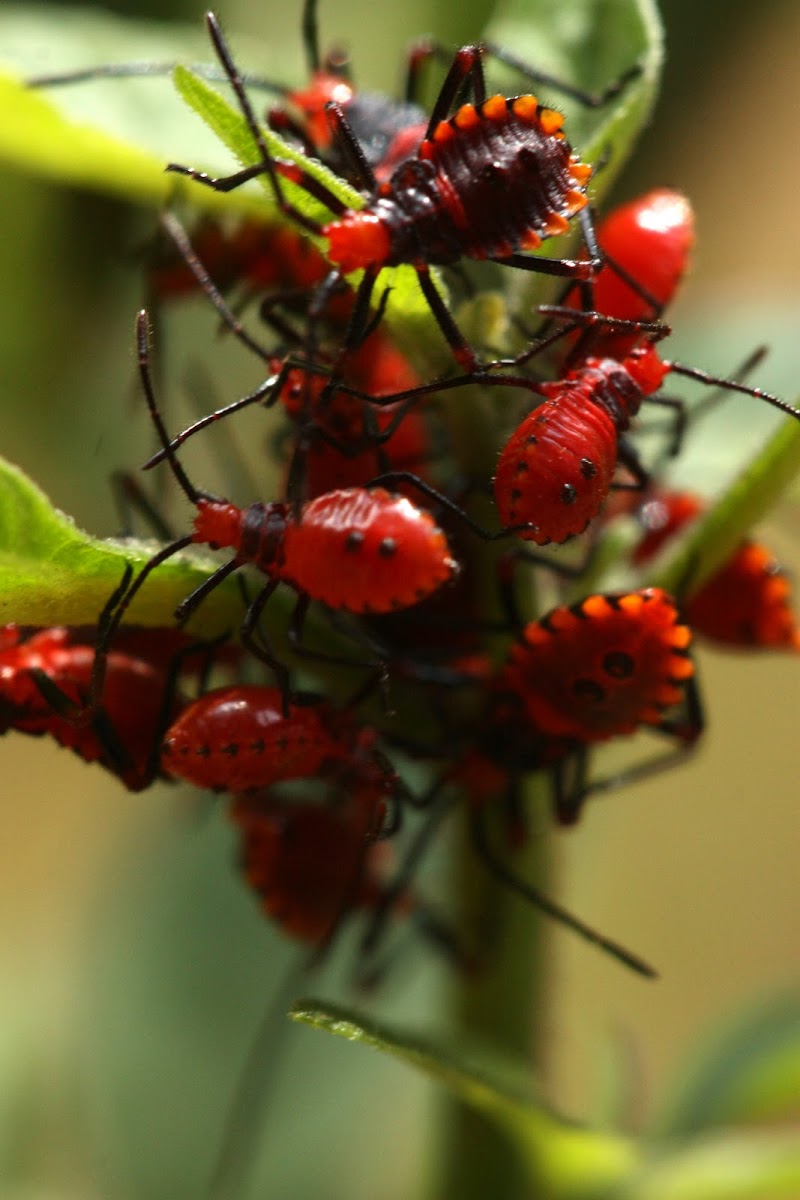 One of the odd things about this behavior is, you may see a herd of them like above on one plant and yet a plant right next door will have none.
When you will see these is variable. Adults have been taken during all months of the year in the deep South, but populations are highest during the warmer months.
I should also warn you of one other thing and sadly, I fell for this. The nymphs of Leaf Footed Bugs look VERY much like our friends the Assassin Bugs. The abdomen of the Leaf Footed bug tends to be a little wider.
One other good way to tell is, if you see a bunch of them clustered together or if they are hanging out with adults, then they’re Leaf Footed bugs. This is NOT always the case but it might give you a better idea.
Happy Growing!
Darren
Posted by Darren at 10:20 AM