I receive a lot of flack from many of my Master Gardener friends because of my feeling towards Native Plants. The majority of them are just not pretty in my eyes. I know, they are beneficial and are adapted to growing here. There are a few, very few, that I like. The one I am going to discuss today is my signal that Fall is here. For many, that signal is Football, or maybe the leaves changing color, mine is when the Solidago altissima starts to bloom. The common name? Goldenrod or Tall Goldenrod.

Solidago altissima is the official wildflower of South Carolina. It became that on May 14th, 2003. Nancy Odom, State Wildflower Chairman for the Garden Club of South Carolina spearheaded this effort. Garden clubs throughout the state where asked about the idea of a state wildflower, to spark interest in native plantings. Queen Anne's lace was the big winner with the clubs, but it was determined that this plant was not native to South Carolina. Goldenrod had come in second, so by disqualification, it became the winner. This particular species of Solidago is actually native to much of North America. It grows profusely in fields, on roadsides, and along fence lines. Its bright yellow blooms appear in the Fall and attracts a large array of birds, insects, butterflies, and bees. There are many species of Goldenrod, which grows throughout North America. Tall Goldenrod, is the largest of all the species. It grows upright to a height of 3 to 5 feet. Leaves grow in an alternating pattern all the way up the stem with larger leaves at the base of the stem and smaller leaves at the top. The lowest leaves usually dry up and fall off by the time the flowers appear in the Fall. The bloom is a shaped similar to a pyramid with a cluster of many tiny flowers. It can be 2 to 12 inches long. The flower petals are notched at the end. The flower cluster weighs so much that it makes the stem curve downward. Once Goldenrod becomes established, it can quickly spread over a large area. 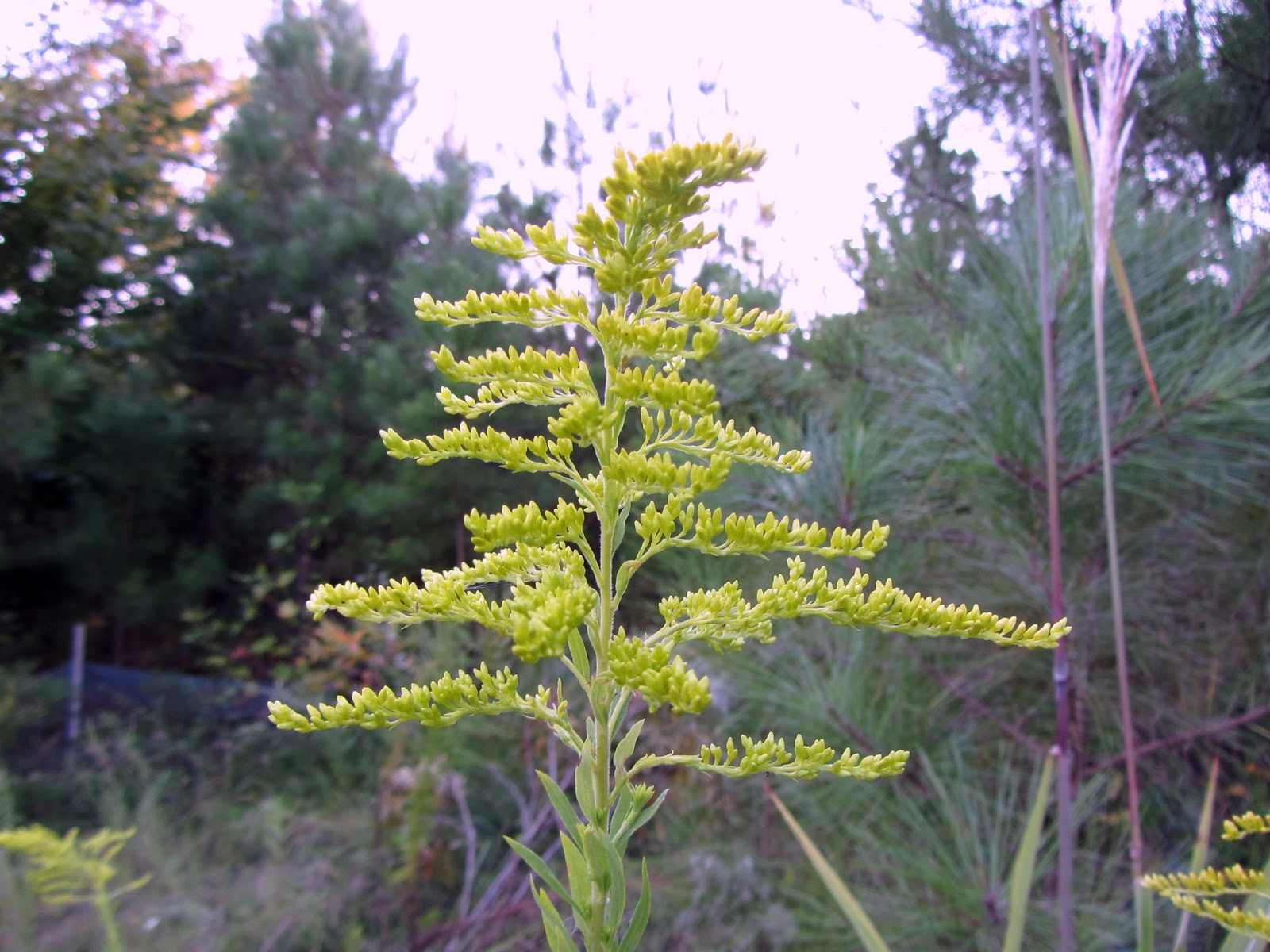 Solidago has actually gotten a bad rap over the years. It is often blamed for allergies, hay-fever, and sneezing. This is not the case! The fact is, these problems are caused by ragweed, which looks similar and also blooms in the Fall. This is what the real culprit looks like: 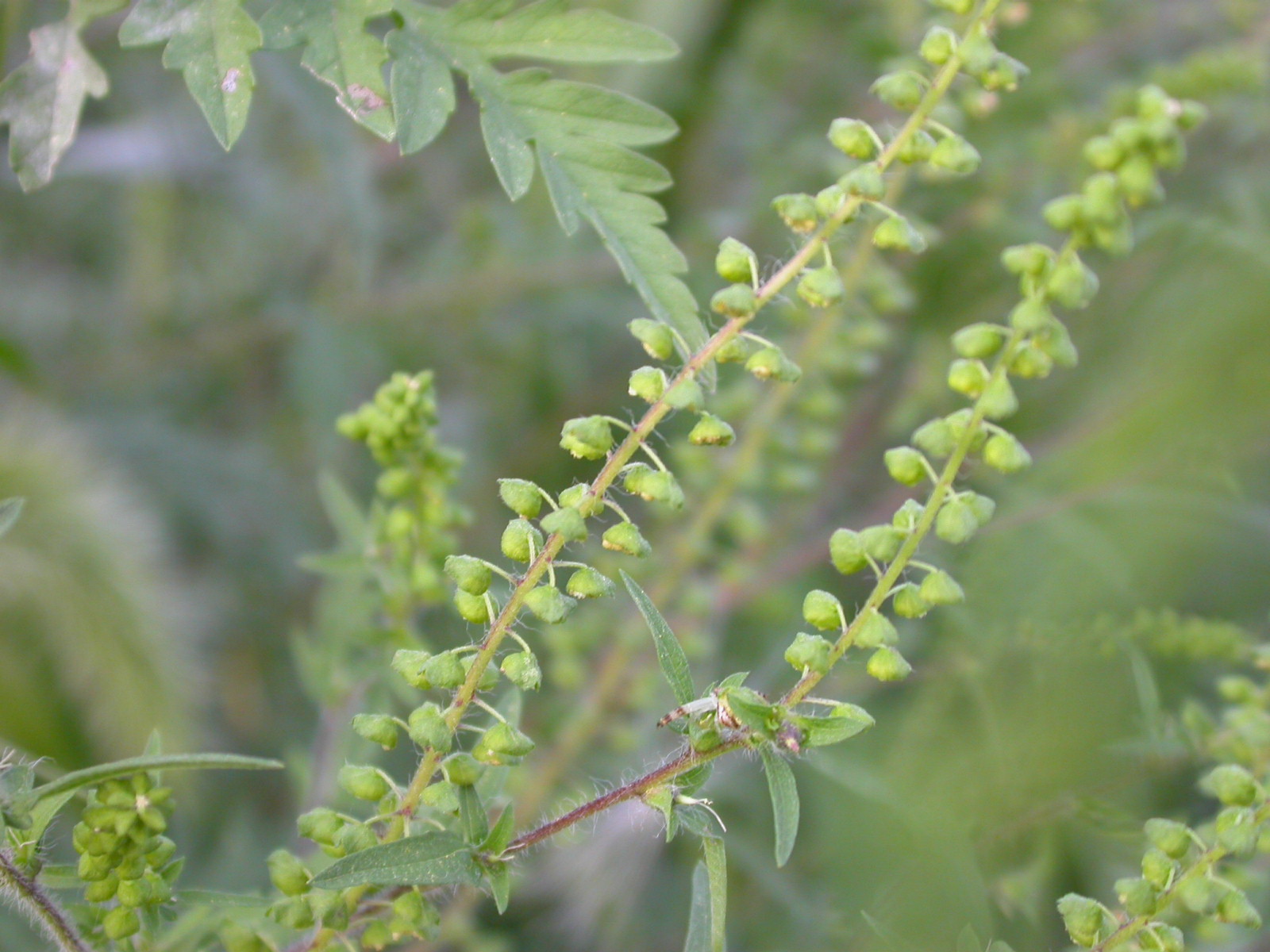 It is a very small flower, but it produces huge amounts of very light weight pollen. Matter of fact, Goldenrod pollen is too heavy to be carried on the wind. I can not say it any better than a beekeeper in Hemingway, South Carolina explained it, "Goldenrod is NOT responsible for your allergies. The pollen is heavy and sticky, designed for insect pollination, not wind. The only way to get goldenrod pollen in your nasal passages is to stick the flower up your nose!"
And there it is.
Other than telling me it is almost Fall, there are many things that Solidago is good for or has been used for. The blooms provide food for bees, wasps, butterflies, and moths. Its long stems offer a nesting place for insects to lay their eggs. Birds and small field animals find homes and protection in masses of this pretty plant.
It even has some ancient uses.
The Native Americans that were indigenous to South Carolina called Goldenrod "Sun Medicine" because of its bright color. They would cook the leaves and flowers together and put the mixture directly on cuts and wounds to promote faster healing. They also made a tea from the leaves to ease stomach cramps. Because of its tradition as a healing plant, the scientific name for Goldenrod became Solidago which means "to make whole" in Latin.
Thomas Edison also had a liking to Goldenrod. He experimented with the plant to produce rubber, which it contains naturally. During WWI, the price of rubber rose from roughly 20 cents to more than two dollars a pound. It quickly became clear that depending on others for such an important commodity left the United States vulnerable – and we now needed more rubber than ever for the production of cars, trucks, and tanks. Henry Ford asked his good friend, Thomas Edison, to figure out how to make rubber domestically. After some years of experimenting, Edison found that the Goldenrod showed the greatest potential. Sadly, he died before he could bring his project into production, and soon afterward the government decided to invest in new German technology that made rubber synthetically from coal and petroleum products.
So as you can see, this native plant has had a great run so far. It has dabbled in medicine, history, and is a great friend to many different kinds of critters.
While I know I am going to get lots more flack for saying this, I think this is one of the few native plants that I can actually get to like.
Happy Growing!
Darren
Posted by Darren at 6:50 PM 1 comment: