To say that this Spring has been busy, would be an under statement. The nursery that I work for, if we didn't set a sales record for the month of March, we were REALLY close!
Here in the greater Charleston, SC area, we have been lucky. Yes, the economy has been bad, but I don't think we have been as hard hit as some of the rest of the nation. That is one of the main reasons we have been so busy.
I have actually enjoyed being this busy. The money has been good, I get to talk to lots of people in the horticultural business, plus I get to play with plants all day!
I was making a couple of deliveries today, both contained the topic for today's post, Magnolia trees.
I decided on this topic for a couple of reasons:
1) Magnolia trees are a staple of the southern landscape, hence they are often asked about.
2) The particular cultivar that I was delivering was D.D. Blanchard and I wanted to research why it was named that..
Magnolia grandiflora. There are estimated to be between 80 and 100 species of Magnolia that are native to the eastern United States and southeastern Asia. The grandiflora being the most common and thought about here.

These are not for the small garden. They can tower to a height of 60-80 feet, 30-50 feet wide and have leaves as long as a foot. These things demand attention in a landscape. Those foot long leaves are a dark, deep green and the undersides might be a lighter green or fuzzy, rust brown. The Magnolia is considered an evergreen, though there are a few species that are not. The flower is something amazing too. They can be as large as 14 inches across. The smell is a clean, crisp fragrance. They usually flower in May and June. Everybody is probably familiar with what they look like: 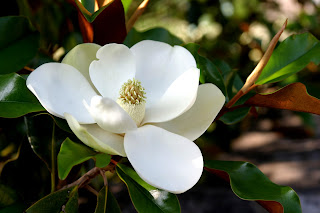 After flowering, it will produce a fuzzy, brown fruit that is 3 to 8 inches long. The bright red-orange seeds inside are exposed September through November. The fruit fall in November and December. Magnolias can be grown from these seeds. They should be collected as soon as possible after the fruit is mature and planted. The seeds should be covered with about l/4" of soil and mulched to prevent drying. Seedbeds should be kept moist until germination is complete. Partial shade should also be provided the first Summer for seedlings.
The growing range for Magnolias is from eastern North Carolina, south along the Atlantic Coast, to central Florida, then westward through roughly the southern half of Georgia, Alabama, and Mississippi, and across Louisiana into southeast Texas. Now, of course, this is on the assumption that the trees did not read the book or peruse the internet much. I know of a few trees outside of this "range", so take it with a grain of salt.
These majestic beauties are relatively easy to care for.
The ideal soil for most Magnolias is rich, slightly acidic (pH 5.0 to 6.5) and well-drained. They will tolerate moderate drought and even tolerate wet soils.They prefer an even moisture level however. Plant in full sun or partial shade. They will flower better in full sun.
When it comes to feeding your Magnolia, the first three years are when it is needed. Any well balanced fertilizer, such as 10-10-10 can be used. It should be done in March, May and July. By the fourth year, the tree should have a well-established root system and should be able to forage for nutrients on its own. Magnolia roots have been shown to grow more than three times further than the canopy width of the tree, so they can obtain nutrients applied to any nearby plants or lawn.
Magnolias are generally pest-free. They may be troubled by various types of scales, which can infest twigs and leaves. If the tree is still small, this can be taken care of with insecticidal soap or a horticultural oil. If the tree is very large, this will be difficult and probably not needed anyway. If the thought of these insects on your larger tree bother you, look into one of the systemic insecticides. These are taken up by the trees roots and into the leaves, thus killing the pest. Just make sure it is labeled for Magnolias. The label is the law and should be followed exactly. They are also subject to leaf spots, black mildew, blights, scab and canker, caused by various fungi or bacteria. Control is not generally warranted unless it is so severe that the health of the tree is declining. You may want to consider consulting with an arborist in this case.
I guess I should mention that if you do have a small yard and are just dieing to have a Magnolia tree, there is a solution for you. Magnolia grandiflora 'Little Gem' - This is compact and upright, more like a dense shrub (20 feet tall, 10 feet wide). Leaves are small (4 inches) and lustrous, dark green and bronze. Flowers are much smaller (3 to 4 inches). It blooms at an early age and sporadically throughout the growing season.
As many of you know, I like to occasionally give out some facts that, if you are ever on Jeopardy, might just win you lots of money. So here is some trivia you might enjoy:
The Magnolia is the official state flower of both Mississippi and Louisiana.
Mississippi's nickname is the "Magnolia State."
Magnolia flowers do not yield true nectar; instead they produce pollen in very large quantities.
The Magnolia is one of the oldest plant species, with fossil remains dating back 36 to 58 million years ago.
Well, I hope this little article on Magnolias was interesting and useful. It truly is a Southern staple and deserves a place in any formal garden or where a large specimen is required.
Consider one if you can.
Happy Grow......What's that you asked? I never told you where the name D.D. Blanchard came from?
After searching high and low, pouring through numerous websites, the answer is:
I have no idea.
If somebody out there knows, please tell me. I hate not knowing something!
Happy Growing!
Darren