Everybody knows what the leaf of a plant is. They are the parts that contain chlorophyll which converts carbon dioxide and water to simple glucose sugars in the presence of sunlight. Simple, right?
Now, I have talked to some folks, and we have debated the question, are the leaves the heart of the plant? Some think it is the roots, others think it is the stems, others say the sum of all the parts are the heart. I am not going to go into that here, though someday it might make for an interesting poll question.
No, today, I want to talk about "what the leaves are telling us". If there is some kind of issue going on with the plant, be it insect, disease, or some other pressure and you know what to look for, then you can take appropriate actions.
Let's start with one, very briefly, that I have discussed before.....Citrus Leaf Minor. I get folks calling me in a panic because they think that they have some terrible Citrus disease because their leaves are all curly and have weird squiggles in them. Very often they look like this: 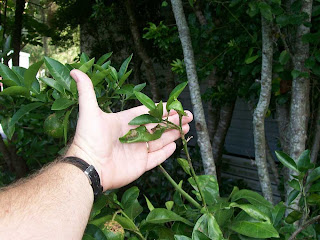 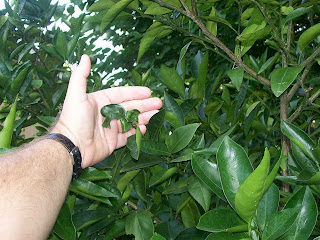 Thankfully, it is just cosmetic damage, a plant this size will be fine. You can read my article on this particular pest HERE
Another cosmetic damage producing insect is from the Megachile spp. family, better known as the Leafcutter Bee.
If you have ever grown a Red Bud Tree (Cercis canadensis), then you know what the leaf looks like: 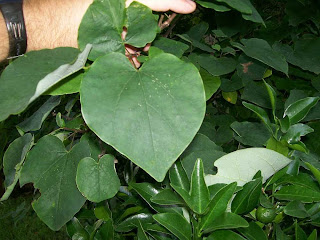 But, have you ever seen a leaf that looks like this? 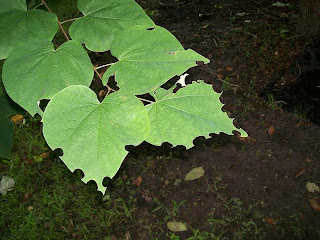 This is caused by the Leafcutter Bee. They don't actually eat the cut pieces of leaves that they remove. The female uses them to line her nest. Leafcutting bees construct these nests in soil, in holes in wood, or in plant stems. Actually any small hole will work such as shells of dead snails, holes in concrete walls (like those produced for hurricane shutters) and other holes in man-made objects are used as nesting sites. I actually found a nest one time in the drainage hole of one of my potted plants.
Leafcutting bees are found throughout the world and are common in North America. In Florida alone, there are approximately 63 different species!!
Most of the common Leafcutter Bees are approximately the size of the common honeybee, although they are somewhat darker with light bands on the abdomen.They are solitary creatures and are not aggressive. They sting only when handled. If you do happen to get stung, the sting is very mild, much less painful than that of honeybees or yellowjacket wasps.There is no need to try and control them, they are actually our friends, other than the cosmetic damage they create, they are important pollinators of wildflowers, fruits, vegetables and other crops. So if you see some damage like this, just know that you are helping a mommy bee rear some new young that will eventually help you produce something to eat.
Well then, we have discussed two different kinds of insect pests, now lets discuss a fungal problem.
I am sure this probably affects other trees, but the main ones are Cherry (sweet, sour and ornamental), Plum, Peach, Apricot and all other stone fruits. The problem? It looks like somebody has been practicing with a shotgun: 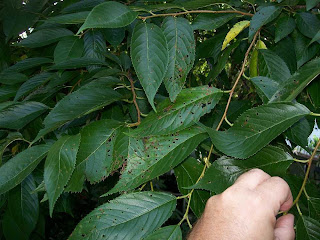 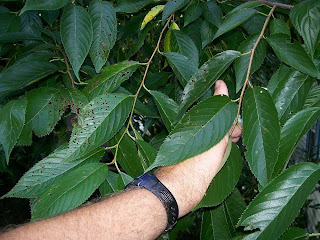 No, your next door neighbor's child has not been out with their BB gun either. This is caused by the fungus Blumeriella jaapii, also known as Cherry leaf spot, or shot hole disease. Initial symptoms appear as reddish to purple spots on the leaves. After several days, the spots turn brown and drop out of the leaf, thus, forming a "shot hole". Infected leaves eventually turn yellow and fall from the tree. Shot hole fungus commonly overwinters inside the infected buds, as well as twig lesions, where the spores may thrive for several months. Infections can occur anytime between Fall and Spring, but is usually most severe following wet Winters. Prolonged Spring rains can also encourage this disease, as spores are spread from the splashing rain.
This disease is difficult to control, and chemical sprays are not practical for the home gardener.

These are just a few things that leaves can tell us. It may not always be as obvious as the examples above. Sometimes it might just be a small variation in color or the leaf might be a different size then it should be. The best habit I can suggest to you is, inspect your plants on a regular basis, that way when something odd starts to occur, you will be on top of it.
If you find something odd on your leaves, please don't hesitate to ask me what it might be. You can send
your questions and pictures to TheCitrusGuy@netzero.com. If at all possible, pictures are the best thing you can send me to help identify the issue.
There is one other thing that you can try. If there is a problem discovered, you can look at the plant and scream...."Leave the Leaves Alone"!!!
Happy Growing!
Darren