The first half of 2014 may go down in the history books as one of the worst winters in years. Everybody is tired of all of the cold and snow and any of the other four letter words you can associate with winter. All my gardening friends are really getting the fever to go out and do something, anything, in their yards. As depressing as this has all been, I wanted to try and put some good spin to the benefits of this nasty weather. I also wanted to discuss what you should and should not do to your cold damaged plants.
Let's start with the temperatures and chill hours. These are calculated by how long the temperature is below 45 and above 32. There are many plants that need lots of these type of hours to have a good fruit set. Apples, Peaches and Plums are some of the ones that most people think of off the top of their head. Did you know that brambles (Blackberries, Boysenberries and Raspberries) need chill hours also?

If you want to learn more about Brambles and growing them, check out the article I wrote a few years ago HERE
So with all of the cool and cold temperatures we have had, it ought to be a bumper crop of a lot of fruits. There are some fruiting plants that don't like the cold however, and because of when they flower and start to set fruit are probably a total loss this year. Here in the Charleston, SC area, the Loquats are pretty much toast, but this is suppose to be an article to spin the cold good, so we won't dwell on them.
Moving on to other aspects of what the cold has done.
For those of you that hate to prune or just can't seem to thin out the number of plants that you have, this has been your winter!
I hate pruning. I do it if I absolutely have to, but I find it hard to cut off parts of a plant that are still growing. This winter has fixed that problem!!
With that being said, I don't recommend doing any pruning until it starts to get warm and STAYS warm. The reason I say this is because you don't know how much to cut yet. You need to cut off all of the dead wood, but you don't want to cut off too much either. The number one question I have been getting is, "Should I cut back my dead looking Citrus tree"?
NO!! Not yet. 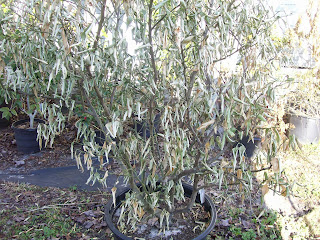 If you grow any citrus trees, they probably look like the one above. Don't panic! They are still alive. If you want to test and see, scrape the bark in a small area and look for green. I know this is hard to see, but kind of like this: 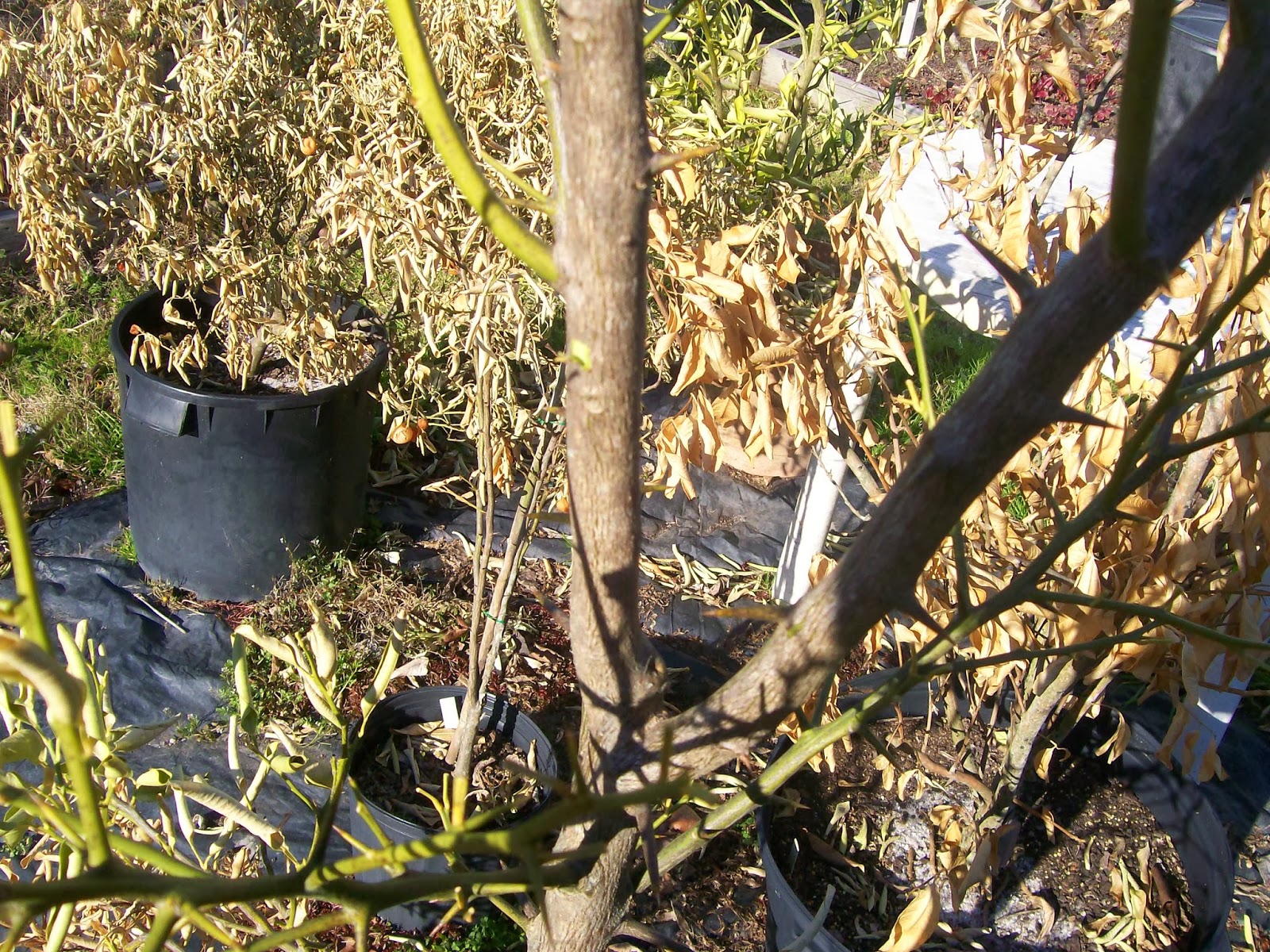 If you look at almost the very center of the picture, you will see a small scrape and green. This one is going to be fine.
If you do find brown, go down about 6 inches and do it again. Keep going until you find green. If you get to the bottom and still nothing, all hope may not be lost. The rootstock may come back and give you something new. It may not be very tasty, but there would still be a plant there. Incidentally, this will work for pretty much any plant.
As for the thinning of your plant collection. I admit it, I am a plant whore. I have many, many plants. Probably more than I really need, though, when is too many reached? This weather has definitely killed off a bunch of my "borderline" for this area plants. Do I restock or do I just go with what I have, time will tell. In the meantime, I will be able to pay more attention to the ones that survived.
Okay, that gives you a little hope from the cold.
What about the snow and ice?
The ice will actually protect the plants from the wicked low temperatures. Down in Florida, they use ice as insulation from the extreme low temperatures.

How it works is best described here from the Florida Extension Services:
"Cold protection with sprinklers: The principle behind the use of sprinklers to protect trees from freezing is that heat is released when water changes from liquid to ice, a phenomenon known as heat of fusion. When water is freezing, its temperature will be near 32 degrees F; therefore, the heat liberated as the water freezes maintains the temperature near 32 degrees F. This temperature, known as the triple point, is in equilibrium between vapor, liquid and ice. If sufficient water is applied, and all leaves and branches are covered with ice, protection can be expected. If only partial coverage of leaves or branches is accomplished, damage can occur, and the damage will be more severe than if water had not been applied. Do not stop sprinklers until the temperature is 32 degrees F or above and water is dripping from all parts of the plants."
Wow, that was intense! I hope you got the gist of that?!
I don't recommend this to homeowners, I don't even do this. There are many factors that can go wrong. It can break branches. You end up using LOTS of water and flooding your yard, the neighbors and half of the neighborhood. Like the extension said, if the coverage is not complete, damage can still occur. So for us hobby growers, it is just not feasible. How does this tie in to a good spin? Mother Nature is providing the ice, so maybe it will prevent further damage.
The prediction of snow usually has a lot of people freeking out. Yes, driving is treacherous, schools and such close, but for us gardeners, it can be a good thing. Have you ever heard of Poor Man's Fertilizer? 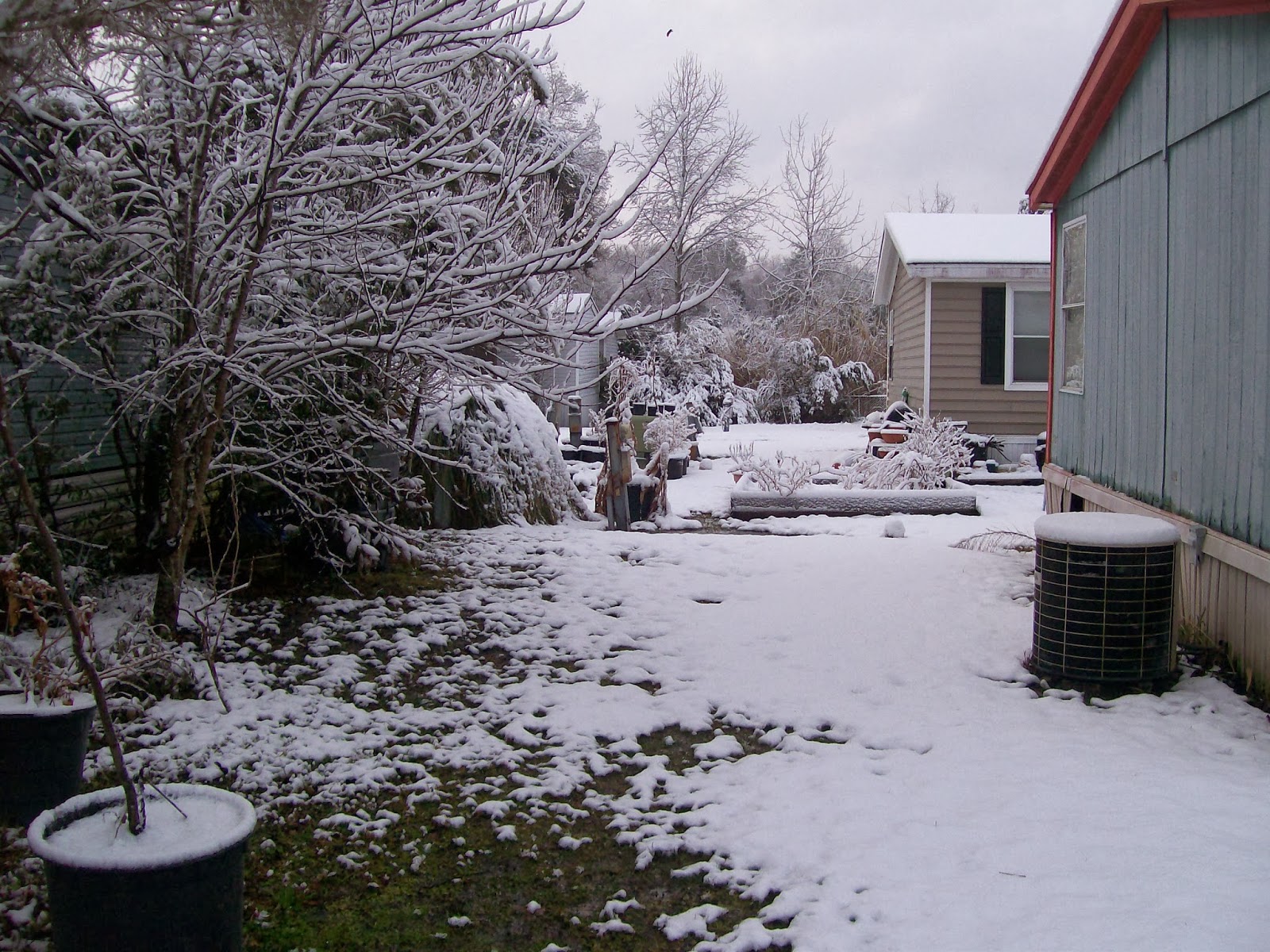 That is how I try to think of snow. Rain and lightning contain even more nitrogen than snow does. But snow has the fertilizer reputation because it feeds nitrogen to the soil slowly over time at a rate it can be absorbed. As every school kid knows, the atmosphere is 78% nitrogen gas (N2), which is a compound made up of two bonded nitrogen atoms. It’s easy to assume the N2 is what comes down to the ground in precipitation, but that’s not quite right. Nitrogen exists in numerous forms, and N2 isn’t directly usable by plants. It needs to be first converted, or “fixed” into mineralized nitrogen forms. These forms are suspended nitrogen compounds such as nitrogen oxides, nitric acid, and especially ammoniacal nitrogen. These compounds find their way into the atmosphere from the burning of fossil fuels. It is estimated that since the industrial revolution, the nitrogen content of precipitation has increased dramatically. Who says pollution is all bad?
I hope I haven't gotten too technical and this was easy enough to understand?
But, as you can see, cold, snow, ice and all that other crappy weather associated with winter may not necessarily be all bad. There might even be a little good coming from it.
I still think winter bites, but at least I can take some pleasure in knowing that, in the long run, my garden and yard will be better off for it.
As always, if you have any questions about this article, or anything else gardening related, don't hesitate to ask. I can be reached through this blog OR TheCitrusGuy@netzero.com
Happy Growing!
Darren
Posted by Darren at 7:44 AM No comments: