There are times that you see something that just makes you go, what the heck is that?!
And WHY would somebody make that?
I have seen some odd color combination's of cats, heads that are too big for their bodies, too many toes, etc. Don't get me wrong, I think they are adorable, but most of the time, it was kind of a "not on purpose" type of thing.
I have just acquired a couple of plants that might just fall into this category. Common name is bush ivy, the botanical name is Fatshedera lizei.
If you want to pronounce it:
fats-HED-dur-uh LYE-zee-eye
This plant was not made in nature, it is considered an inter-generic cross. Kind of like crossing a cat with a mouse and getting a camouse.
It was made in 1910 at the Lizé Frères Nursery at Nantes, France and has never been repeated. The name is a combination of the two plants that produced it. Fatsia japonica and Hedera helix. A Fatsia and an Ivy plant. These types of hybrids are very rare and almost never occur in nature.

As you can see, it looks very much like the Ivy parent. But it tends to grow more shrubby like its other parent, the Fatsia.
It grows in Zones 8 through 11. As the leaves mature, they can handle down to 15 degrees. Newer growth will be hurt at 20. It will stay an evergreen at these temperatures, however below 10 degrees it wll get killed to the ground, but will recover in the spring.
Fatshedera prefer some dabbled morning sun, but can be grown in shade. This aspect makes them useful as a houseplant.
They grow in a wide variety of soils, as long as it has good drainage. Regular waterings are best, but it is also fairly drought tolerant.
If you want to grow one of these, but can't find one for yourself, find a friend that has one. Take cuttings in summer, they root pretty easily.
They are easily grown in containers. For those of you that like this kind of look, it can be successfully used as an espalier if given support. It does nicely trained on a trellis or can be tied to a post or other vertical support. If planted against a wall it will try to grow up, often sending shoots out away from the wall, creating a plant that is too heavy and it will fall over. It did not inherit the anchor roots from its Ivy parent. For this reason it is not advisable to plant this if you do not plan on providing the occasional required pruning and fastening to the support. New growth should be occasionally pinched to promote branching since stems rarely branch on their own. 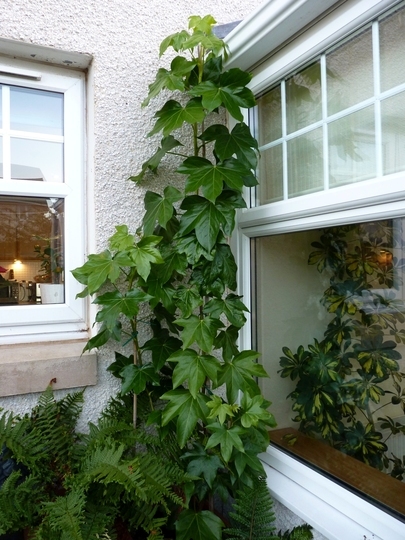 There are no disease problems noted, it will occasionally be bothered by scale or aphids. Insecticidal soaps or systemic insecticides will take care of them.
One other thing it picked up from its Fatsia parent was the ability to flower. In the summer, it will produce an umbrella like flower stalk, with white, sterile flowers.

I mention the sterile flower part because there are folks out there that are always worried about invasive type of plants. This thing is definitely not from around here, and there are no worries about it taking over, unless everybody reads this, falls in love with the plant and plants some!!
There are even some different cultivars out there, whch include 'Pia', with wavy-edged leaves; 'Variegata', with narrow white leaf margins; and 'Anna Mikkels', with yellow-variegated leaves. 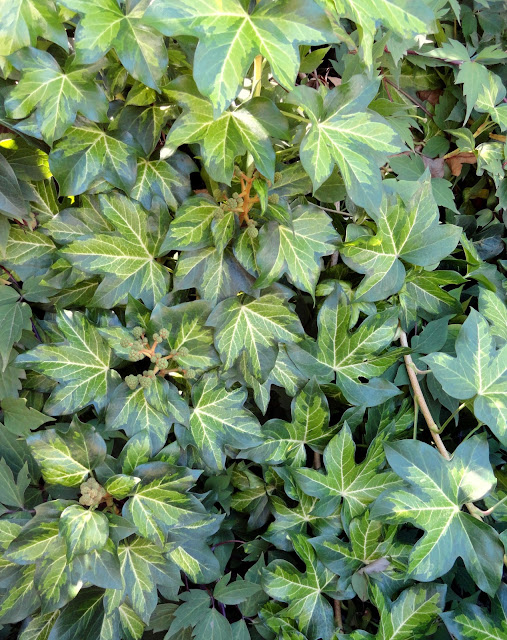 I hope you enjoyed meeting my Frankenplant and decide to get one yourself and give it a home.
As always, if you have any questions about this article, any of my other articles or even a garden question that I could write about at a later time, don't hesitate to drop me an e-mail, TheCitrusGuy@netzero.com
Happy Growing!
Darren
Posted by Darren at 5:27 PM 3 comments: