To say the past two winters have been rough is probably an understatement! Many citrus trees took a pretty good hit and some have not survived, though many more have. Is this reason to want to quit trying to grow citrus? Absolutely not!!
While there has been some major losses of entire trees, I have been getting reports of trees that were thought to be dead, coming back. Hence the topic for today's discussion, pruning.
I get asked very often, when is the best time to prune my citrus tree? My usual response is, why do you want/need to prune it? There is always a myriad of reasons, many of which are not good reasons, "aren't I suppose to", "I saw online that it has to be done", "my neighbor did it". Then there is the little more reasonable "it is in my way" or "I don't like the way it looks".
This is a case of where you should research the plant before putting it in the ground. In the last two cases, moving the tree or pruning might be your only course of action. We can go into a huge, long discussion about this.
However, like I said at the beginning, there have been some rough winters and some folks trees were getting ready to be kindling, but lo and behold, they have sprouted new growth. What should I do now?
Do you have a tree that looks like this: 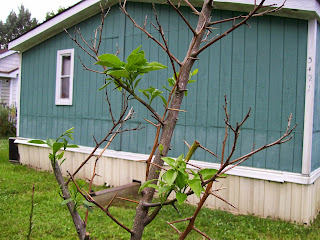 This is also the reason that I usually tell people to hold off pruning any cold damage until you are sure what is truly dead.
Here is another picture of the same tree: 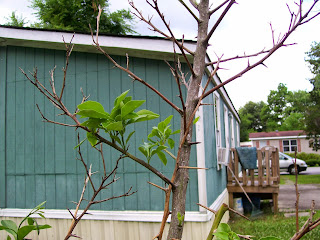 If you would have seen this tree just a few weeks ago, you would have written it off for dead. I had a hunch it would be fine, the cambium layer, just under the bark, was still green in places. Do you see now why I say hold off? 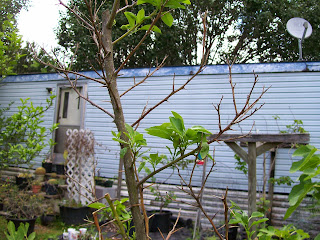 If I had just started cutting away, I might have cut off some new growth. Cold damage on citrus trees can be very deceiving. If the damage is low on the branch, there might be enough energy in it to initiate growth, but, if the damage is not allowing nutrients from the roots, it will be a short lived flush. Waiting until mid Spring gives you a better idea of where you stand. When you are pretty sure you can start cutting, prune small sections at a time, just getting to some green, living material, then stop. You don't want to cut too much off, but you also want to make sure you get all the dead wood off.
I wanted to also share something else that, because I did not prune when it was damaged, is showing some good signs. 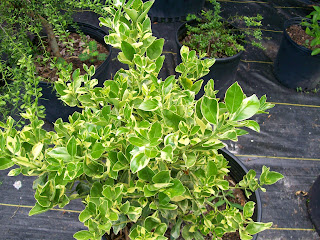 This is my variegated Calamondin. The winter of 2013/14 almost killed it. It had dropped every leaf and was nothing but a couple of sticks. I watered it and just let it be, this year it is going to produce fruit again.
There is no real manual for pruning citrus, you need to remember that, if you start cutting citrus trees, you will be cutting flowers and fruit off.
I wanted to end this discussion today with some encouragement for those of you struggling with your trees. As you may or may not know, I grow all mine in pots. I do protect some of them over the winter, but not all. This is just a few of my trees that are bearing fruit this year: 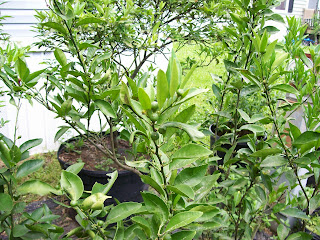 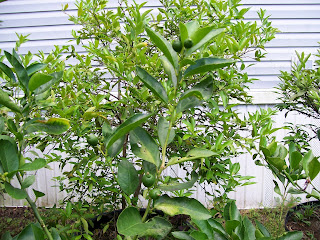 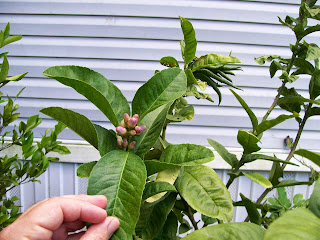 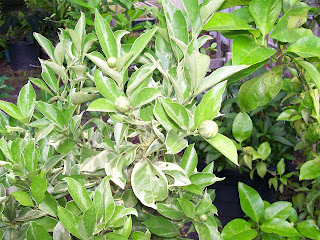 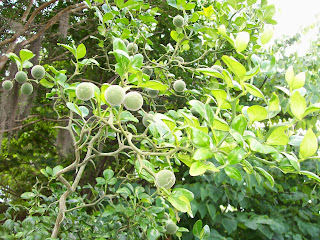 As always, if you have any questions about this or any of my other articles, feel free to ask. My address is TheCitrusGuy@netzero.com
Happy Growing!
Darren
Posted by Darren at 1:12 PM 4 comments: