Gardening is suppose to be fun, relaxing and enjoyable. Yes, it is hard work at times, but overall you are suppose to enjoy it!
You plant seeds or buy that really cool plant that you have been hunting for weeks. A friend offers you some rooted cuttings in exchange for some that you have that they want. Maybe even replace a worn out tree or shrub. Yes, it is work, but you feel so good after it is done.
Now comes the caring for it, watching it, feeding it, talking to it (you know you do) and all of the other things that need to be done for your new baby. Then, the unthinkable happens....it dies!!

You scratch your head and wonder, what did I do wrong?
I fed it, I watered it, I did EVERYTHING that I was told to do. So what happened?
Well, here is a list of things that could have happened.
Let's start right at the beginning:
Incorrect planting – this could be the number one cause for most plant failures. Burying the root-ball too high or too low, thus not giving the plant’s tender roots enough room to grow out. I recommend a 1"-2" height above your soil line. Along these same lines, driving a stake through the tap-root, to "help" stabilize the plant is another common plant murder method. Use 2 or 3 opposing stakes, out away from the rootball. 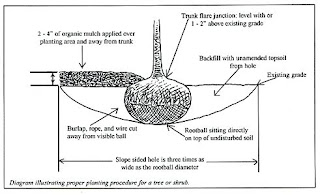 Okay, you checked and you planted it just like Goldilocks, not too deep and not too high, but just right.
Next on the agenda.
Too much or too little water – obviously the next culprit could be, the amount of water you gave your plant. Although all plants need at least some water to survive, giving them too much or too little can cause them to die. For example, overwatering can lead to a plant’s roots not receiving enough air, causing the plant to suffocate. It can also lead to root rot. Make sure the soil stays damp, but don’t let water pool or let the soil get dried out. I usually use the analogy of, "keep it the consistency of a wrung out dish sponge". 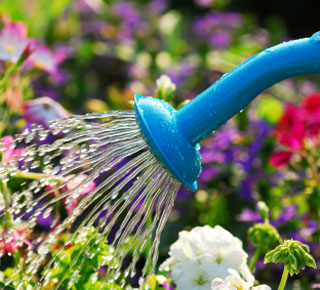 You feel pretty confident your watering regime is good?
Well, to the next possibility.
Over-Fertilizing – Most plants will not tolerate fast acting fertilizers around their roots. The common practice of putting fertilizer in the bottom of the hole at planting is very dangerous. The plant will go along quite happily for the first few weeks until its roots hit the concentrated food – then all of a sudden the plant will drop dead – poisoned by the concentrated mess it’s grown into. This is also why I DO NOT like fertilizer stakes. Instead, provide an organic slow release fertilizer around the plant’s drip line. 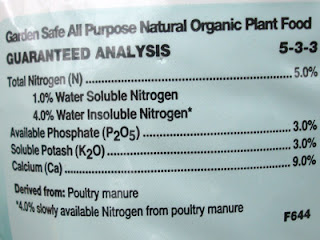 Using a safe, organic fertilizer, according to the package directions?
Good for you!
Maybe this is the problem.
Teasing out the roots–  There is much debate about this one.When you plant your plants do you tease out the root-ball? Teasing or pulling at the roots damages the fine feeder roots which absorb the water and nutrients for the plant. By damaging the roots, you run a very high chance of killing the plant.
This will have to be a case by case basis. If the roots look healthy and are just to the edge of the pot when you pull it out of the container, teasing is not needed. If there is a lot of roots and they are circling around and around the rootball, then tease away. If I ever get a plant that looks like the one below, I have been know to actually slice through some of the outside roots to help develop new ones. The plant can literally strangle itself with it's own roots if you do not stop the circling. 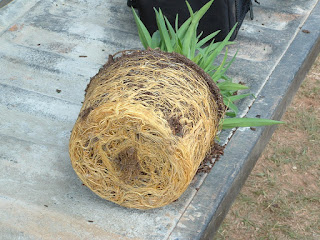 Roots looked good, huh?
Well then, did you check for:
Sunlight Issues – If a group of plants growing close to each other are dying, they might not be receiving enough sunlight because they’re shading each other, or they might be getting too much sunlight which can be harmful, too. A plant can become sunburnt, just like a human. Putting something like a Hosta or Cast Iron Plant (both need mostly shade) in direct sun, will burn them quickly. On the other hand, putting a Citrus Tree in mostly shade will, best case scenario, not produce fruit, worst case, it will die. 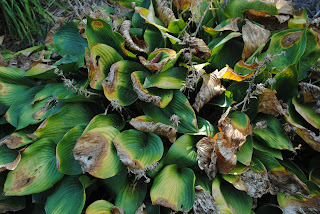 Right plant, right place?
Starting to get harder to figure this one out.
Wrong Season to Plant – buying plants and trying to put them in the ground in the wrong season is not a usual problem, but here is something to think about. Those beautiful ornamental cabbages that you see in the nurseries, usually in the Fall, do you know why you see them then? They need cool/cold weather to flourish. Plant them in the Summer and you will basically have cooked cabbage.
The same goes for Marigolds, plant them in the Winter, you will have dead Marigold popsicles. 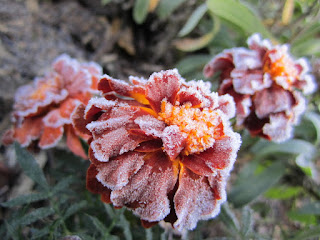 There are few other reasons left as to why your plant died.
Transplant Shock – Sometimes plants just don’t deal well with change. Once they’re transplanted in their new home, they may panic and just die from the shock of it all.
Wrong Soil – Some plants like soil that is more sandy and drains fast, while others prefer more clay-like soil. Check for a pH problem. Some plants just will not grow if the pH is wrong. Too high or too low, the plant can not absorb certain minerals. This is where getting your soil tested by your local extension agent is a must.
Sick when you bought them – sometimes it’s not your fault at all and the plant may have already been sick, diseased or failing before you even bought it. Hopefully, if you buy from a reputable nursery this would be the last possibility.
If you are a tried and true gardener, naturally, you’ll want to know why your plants are dying so you can correct the problem. Hopefully, this list has covered something that you may not have thought about. Every failure is a chance to learn and the next time you can do better. There is one thing to remember though, just like humans, sometimes, for no apparent reason, they just die!
It is a part of life.
Happy Growing!
Darren