They Should Have Read The Book

Here in my Zone 8, almost a 9 growing zone, it has been hot!
Anybody that lives here in Charleston is violently shaking their head in affirmation.
Well, apparently it has been hot in many other locations this year, too.
I know, it is Summer, what do you expect?!
There are some parts of the country that are are experiencing major flooding, please keep those folks in your thoughts and prayers. Then, there are the folks, like us here, that can't get a drop of rain to fall on a bet!
Why, you ask, am I stating the obvious news concerning the weather?
It's all about the citrus trees folks!
Here we are, the end of August and I am getting many reports of Citrus trees blooming, including some of my own. 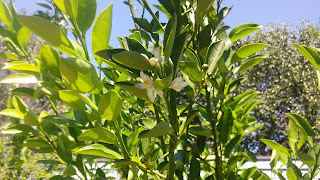 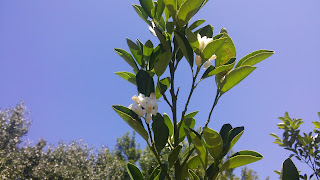 These were taken today, August 27th, 2016. It is one of my Mandarins, that should be flowering in the Spring, usually March or April.
Okay, one plant flowering, it might just be confused. Well, hold on. 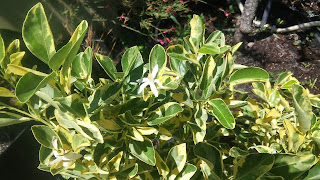 This is my Variegated Calamondin, also taken today. 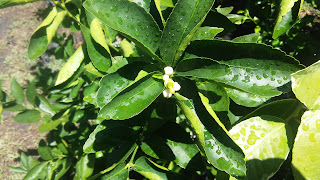 This is my Harvey Lime.
Seeing a pattern yet?
Like I said above, I have been getting other reports of Citrus Trees blooming from as far north as North Carolina, down south into Georgia and even over into parts of Mississippi.
So, what gives?
Fluctuations of moisture is the main cause.
You see, nature is very smart. If you allow a tree to dry out, almost to death, then water it, the plant goes into reproduction mode. You scared the poor thing, it thought it was going to die, so to continue the family lineage, it produces flowers, which in turn produces fruit that has seeds in it.
Back in the early 1600's King Louis XIV found the aroma of citrus blossoms so intoxicating that he had an enormous glass structure built to house his more than 3,000 trees. Its dimensions were 508 feet by 42 feet. Back then, they were called Orangeries, today we know them as greenhouses.
After this massive structure was built and the trees in place, he ordered his royal gardener too make sure there were always citrus trees blooming, so he could enjoy the scent.
Well, in January the average temperature is in the low 30's, not exactly prime citrus flowering weather. They had it heated, so that wasn't a problem even during the coldest of winters. They had figured out that stressing the trees for water produced the flowers that the king wanted. As long as the the gardener rotated the ones he stressed, there would always be flowers.
With all of this being said, you see, you can induce a citrus to flower, but you need to be very careful. If you go too long, you CAN kill the tree! 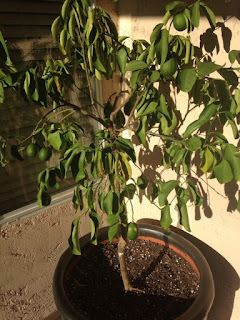 This is the farthest I have ever pushed a tree. It was not on purpose, I got wicked busy and did not have time to water.
I am NOT advocating you attempt this, on purpose! I don't want people e-mailing me telling me their tree died because I told them to withhold water.
If you allow the tree to dry out and the leaves fall off, you went too far. If the leaves perk up, more than likely you will see flowers in a week or two.
Remember I told you it has been hot and no rain?
I guess all of those reports I have been getting are because people wanted to pretend they were King Louis XIV, or their lives just got busy and Mother Nature has been no help!