I have discussed this problem in other posts and to many of my friends in the horticultural world. We are losing the younger generation in the gardening world. Just in the past week, I have seen this personally on two different occasions.
Let me describe what happened.
I enjoy Camellia Show season, going around to the different places throughout the Southeast and competing in a friendly competition of flower blooms. Just a few of the places that have a show include, Charleston, Aiken, Litchfield and Columbia, South Carolina. Then to the north there is Wilmington and Fayetteville in North Carolina. I used to be able to include Raleigh and Charlotte to that list.The Raleigh show has been caput for a couple of years now, but what really struck home was the e-mail I received about the Charlotte show this year. It read like this:

Thanks for your interest about our Show. We had a meeting on November 6. 2016 and after much discussion, the members decided Not to have an Accredited ACS Show in 2017. Our membership is very limited due to health problems and age. We are not gaining any young members and with the young folks buying condos or townhouses or rent an apartment, we have not been successful in promoting Camellias.

Yes, I am upset because that takes a show off of my list to participate in, but that is not the point. What REALLY disturbs me is the fact we can't sustain clubs/societies or anything for that matter without younger blood. I get the condos and apartment thing, but that does not make up ALL of the younger generation.

The second event goes like this.
I work for Terra Bella Garden Center here in North Charleston. This past Saturday I had a gentleman come in with his two boys, ages were probably 8 &10. They were there to get some plants to spruce up the yard after the damage from Hurricane Mathew a few weeks ago. The father had a plan drawn of the yard and wanted a few suggestions. Nothing unfamiliar yet, I see this a lot. The thing that bothered me was, the boys NEVER looked up from their phones! I had lost track of the father for a few seconds, another customer had a question, when I asked one of them where their father went, he said, over there with a head nod, by the car. Never even looked up. At least he spoke. Manners aside, if I ever went someplace with an adult I at least looked around, fascinated by what was there.
I do not remember who it was that took me, probably my father, he passed when I was 8, to a store called 1001 Auto Parts. I was amazed at all the tools, parts, pictures and everything else that was there. I wasn't exactly sure what I was looking at, but it was exciting to see it.
What has happened to that youthful excitement? 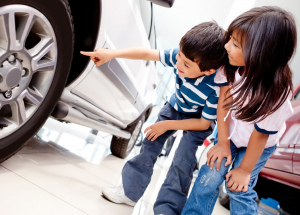 Everything is at the push of a button. You don't have to have an imagination anymore, the screen has it for you. To hear some talk nowadays, it is hard work pushing those buttons, looking at that screen. Our grandparents and the generations before them would be ashamed of what out culture has become.
The old story of, I walked to school, in the snow, uphill, both ways and enjoyed it, has been replaced with, I think I am getting carpel tunnel in my arm, the boss makes me work way too hard, that computer is so slow, I sat there all day looking at the screen, and I never once had a chance to see what the Kardashians were up too!
I know, that might be a tad over the top and is a slight exaggeration, but you get my point. To be honest, not ALL of the younger generations are like that, but it seems to be getting worse with each one!

Here is a video that REALLY hits home:

We need to get the phones out of their hands and their butts outside!
Mark my words, in another generation or two, gardening will all but be totally lost and nobody will be able to grow their own food, except for a select few. Those that control the food control the world!

It is not just about food either. I am NOT a huge global warming fanatic. Is it possible that it is happening, maybe? Are we to blame, doubtful. Do we need to care about the planet, absolutely.
Destroying everything that is growing to build houses is not the answer. We need people to be able to grow replacement plants. Look what happens after a hurricane, trees, bushes, and other plants get destroyed. If nobody is learning to propagate or grow new ones, what can we do?

Anyway, I know this is more of a rant than an article, but it has really started to bother me. All of the recent riots demonstrates this to some degree. There are people out there that, if they don't get their way, they have a temper tantrum. Why not put that energy into growing something for the good?!
Get out into the yard and plant a tree, name it "Therapy". That way in 20 years, you will look at it and wonder what all the commotion was about!
I will now step down from the soapbox.
Happy Growing!
Darren
Posted by Darren at 10:18 AM 7 comments: