Water you talking about!?

I have discussed this issue in the past, yet, there is still a LOT of bad information floating around the internet. I peruse the web frequently looking for people that maybe having issues that I can be of assistance with, and I find lots of misinformation, or just plain old ignorance. I am NOT saying I know ALL of the answers, show me somebody that says they do, and I will show you a liar. Most of gardening is common sense, and yes there is no such thing as a stupid question, but sometimes the things I read????.......WOW!
Today, I would like to discuss a common problem, every living being requires this substance and there are lots of variables to how much one needs.
Watering. 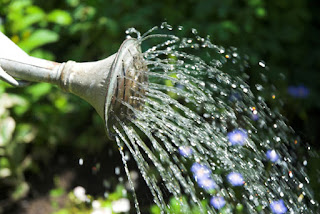 Many of the websites and articles that I read have a sentence in there that drives me crazy! I usually bring it up in every lecture that I do. It goes something like this, “This plant needs one inch of water per week” or something similar to that.
WHY, does that sentence bother me so much?
Let me run a couple of scenarios by you.
You have your favorite plant, it doesn't matter what it is for this example, it has a growing hints tag or you have read that it requires one inch of water per week. Okay, that is fine. What if this plant is in a very sandy soil? Water drains exceptionally well in sand, because it has little to no water holding capabilities. That one inch of water will be gone in hours, the plant is now not going to have access to any water 3-4 days later.
Let's reverse the scene. The plant is in a very heavy peat based or clay soil. Peat and clay hold water very well. That one inch of water may still be around in a week. Then you water again. It continues to build up until the plant literally drowns. More on that in a minute.
So you need to be aware of the type of soil it is in.
What if you are growing things in pots? That opens a whole new set of questions and problems. 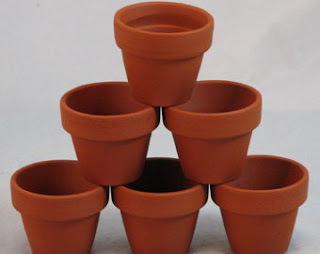 A terracotta or clay pot is very pretty. They are nice and heavy and help to stabilize the plant, especially if you are in a windy area. That clay or terracotta will actually work against you as it wicks the water away from the soil. So here again, one inch of water will be gone in a shorter period of time than one week. Plastic pots tend to retain the water better. You guessed it, one inch of water per week might be too much.
Everybody knows that drainage is important when you are container growing. Pots should have holes in it, well how many holes? 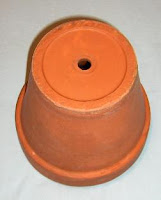 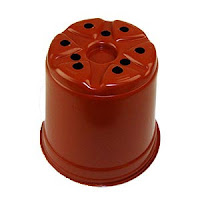 Do you think that both of these would drain the same? Both are plastic, one just looks like terracotta. Let me throw one more monkey wrench into it. If either of these were sitting on concrete and the hole(s) were to become clogged, what kind of drainage would they have? The following would work better sitting on a hard surface. 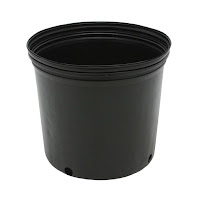 Notice the holes along the sides? There are some in the bottom also.
There are numerous other things that need to be taken into consideration when it comes to how much water a plant needs. The type of plant is a big one. A Cactus will need MUCH less water than a Philodendron. I know, the Cactus label probably does not read one inch of water per week. I have actually met somebody that watered theirs every other day, their thinking was...it's a plant and they need water. It eventually succumbed to root rot.  Then, there was the case of a woman that literally...I can't make this stuff up...watered her large Cactus one tablespoon of water every 6 months and wondered why it was looking poorly. Two true story extremes, but you see the point here.
Size of the pot is another good example. Which do you think would need to be watered more often, a plant in a four inch pot or something the size of a trash can?
How about the weather? Do you think a week of cloudy, overcast, cool weather will need to be watered more or less than one in 95 degrees, with a cloudless sky, and windy?
So, as you can see, there are many more variables associated with watering than the typical, easy sentence of 1 inch per week.
Hopefully this has given you some idea of why you need to know your plants needs and the situation it is trying to be grown in.
What is that you say?
How do you know if you are over-water or under-watering?
EXCELLENT question!
The plant will tell you, if you know what to look for.
Sometimes when plants start to show symptoms of stress, i.e. wilting, the first reaction is to water, but sometimes over-watering can be just as detrimental to a plant's health as under-watering and will show the same response. Symptoms of both over and under-watering can look very similar. Leaves turn brown and wilt. Often times, when this happens to under-watered plants, those dead leaves will be dry and crispy. While with over-watering, those leaves may still be soft and limp.
Here is a little test: Does this wilted plant need water, or has it been over-watered? 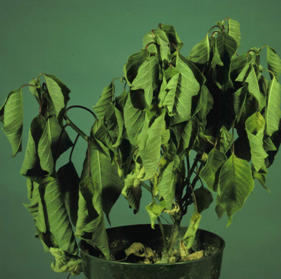 Tough to tell huh?
When the soil stays wet for too long the roots die off and when the roots die off the plant can’t take up water and if the plant can’t take up water IT WILTS!
With under-watering the plant tries to conserve what little water it has by keeping the stalk green and the roots moist, but the leaves will wilt and eventually dry up.
Both over and under-watering can lead to other things, such as stunted growth, and lack of fruit or flowers.
Many people like to use a water meter on their plants. If you are not familiar with these, it is usually a probe that you stick in the soil and it will tell you whether you need to water or not.
I am not a big fan of them because the ones I have had were not very reliable. I tried a test once with one, I stuck it into a pot of extremely dry soil, I know it was very dry because it fell out in one piece, was very light and had been sitting in a back corner of my greenhouse for several months without being watered. The meter said it was fine, do not water.
You actually have a reliable water meter with you right now. Scientifically it is called “the index finger”. Stick that scientific device into the soil, about 1-2 inches....if it feels dry, water...if it is damp, don't and check again tomorrow. Pretty cool huh?!
For potted plants there is another method. Water the plant very well, make sure there is water coming out of the drainage holes. Side note, make sure the water is going through the soil and not just running down in between the soil and the side of the pot. Then, lift the pot up. Get that weight in your head. After a couple of days, lift the pot again. If it feels much lighter than the other day, water, if it still feels heavy, check again in a couple of days.
I have been known to use both methods. I will stick my finger in a pot, then lift it. I very seldom have a water issue problem.
Hopefully, this has shed some light on the subject of watering. If you MUST err one way or the other, do so on the under-watering side. Many plants are much more drought tolerant than we think and will recover from too little water. There are not many that will come back from a dip into the deep end of a pool, unable to swim, with no life preserver!
Happy Growing!
Darren
Posted by Darren at 9:36 AM 1 comment: