We have had a LOT of rain here in Charleston, nothing like Texas thankfully, and please keep them in your thoughts and prayers after Hurricane Harvey. This August was probably one of the wettest that I can remember, or at least seemed that way. While most people don't necessarily like it, I do and the plants certainly do. My citrus are doing well, the camellias look great and the flower bud set is amazing. You know what else is loving all the moisture? The Bananas. 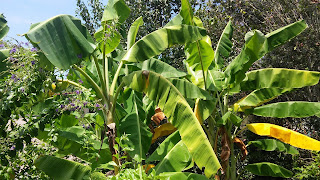 This picture does not do them justice as to their size, they are easily 13-14 feet tall.
Bananas, (Musa spp.) are an edible fruit – botanically a berry and are often mistaken for trees or palms - they are actually herbs. The banana is a perennial plant that replaces itself. Bananas do not grow from a seed but from a bulb or corm, and it takes 9 to 12 months from sowing a banana bulb, or corm, to harvesting the fruit. The trunk is actually a "false stem" or pseudostem.
Banana plants grow best with 12 hours of direct, bright sunlight each day. They can still grow with less (more slowly), but they will stretch to find more, kind of like this one. 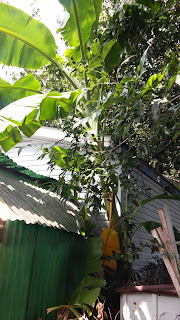 This was actually from, what I thought, was a useless piece of a root and stem. I had tossed it into a pseudo compost pile in between my greenhouse and shed. It rooted and is stretching well above the roof line under a Bradford pear and Pecan tree. The leaves are extremely longer than usual, because of the stretching.
Banana plants require a huge amount of water, but still need to be in soil that is well draining because they are susceptible to root rot. They prefer slightly acidic pH and are not very salt tolerant, even though they are associated with a tropical growing condition. As with any other plant, any balanced fertilizer, where the NPK numbers are close to even, will work, but banana plants need to be supplemented with additional potassium and magnesium for best growth and fruiting. Some of the best banana fertilizer I have found is Banana Fuel

Keep in mind that when temperatures are warm and bananas are in their active growth stages, they are heavy feeders, so feed lightly, but often, maybe every 4-5 weeks.
Bananas flourish under uniformly warm to hot conditions. Shoot growth is best between 78 to 82 degrees and fruit growth at 84 to 86 degrees. Plant growth slows below 60 degrees and stops at 50. So you can imagine that these plants do better in zones 9 and higher. However, some will work in a zone 8 and there even a few dwarfs that will produce fruit in a container. If you attempt to grow some in a cooler climate, chill damage and freeze damage may occur at or below 32 degrees. Symptoms of freeze damage include a water-soaked appearance to all of the above ground parts of the plant as well as browning and death of leaves, and fruit. Temperatures below 28 degrees may kill plants to the ground. However, new growth usually sprouts from the underground rhizome with the return of warm weather. If you do suffer damage to your plant, do not cut the dead leaves off, especially if some of the trunk is still green, they will act as an insulation against the next cold spell. Wait until Spring, then cut off all of the dead leaves and the trunk as far down as it seems mushy. This gives the plant a little head start to coming back. 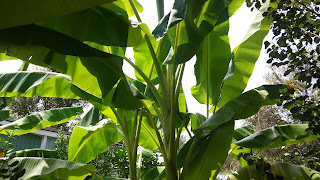 Banana fruit must be transported over long distances from the tropics to world markets. To obtain maximum shelf life, harvest comes before the fruit is mature. The fruit requires careful handling, rapid transport to ports, cooling, and refrigerated shipping. The goal is to prevent the bananas from producing their natural ripening agent, ethylene. So, if you think about it, the fruit you get at the store, is not really ripe, per se. On arrival, bananas are held at about 63 degrees and treated with a low concentration of ethylene to get them ripe enough to sell. Thinking about trying to grow some yourself yet?
While in no danger of outright extinction, the most common edible banana cultivar the Cavendish could become nonviable for large-scale cultivation in the next 10–20 years. Its predecessor 'Gros Michel', discovered in the 1820s, suffered this fate. Like almost all bananas, Cavendish lacks genetic diversity, which makes it vulnerable to diseases, threatening both commercial cultivation and small-scale farming. With that being said, for the hobby grower, the diseases are not extremely common, but it is good to at least know about them.
Panama disease (Fusarium wilt). Panama disease is of worldwide importance and is caused by the soil borne fungus Fusarium oxysporum f. sp. cubense. On mature plants symptoms include progressive yellowing and eventual death from older to younger leaves, so that only the youngest emerging leaf may remain; this is not to be confused with the natural decline of older leaves. The disease will also cause brown and black discoloration and slimy appearance of the stem (it may give off a bad odor as well); and death of the plant.
Pests, again, are not extremely common for the dooryard grower, but it could eventually happen. The Banana borer or weevil (Cosmopolites sordidus) and the Sugar cane weevil (Metamasius hemipterus) act very similar.  They lay eggs at the base of the plant and the larvae bore into the pseudostems and rhizome causing extensive damage. Young plants may be killed by extensive tunneling and mature plants may weaken and topple with a subsequent reduction in yield.
Humans can damage the plant too. You will want to maintain a grass-free area 2 to 5 ft or more away from the plant. Never hit it with lawn mowing equipment and never use a weed eater near the banana. Mechanical damage of the plant will result in the weakening of it, and if severe enough can cause the banana to decline or die.
The fruit bunches are generally harvested when the fingers, as they are called, are plump but before they begin to turn yellow. However, bananas may be picked at different times for different purposes. In general, bananas for fresh consumption in the home landscape may be picked when they have reached or have nearly reached the normal size for your particular variety. Usually, this is when the edges of the fruit have smoothed out and the sides of the fruit have swelled. Homeowners may want to harvest fruit 7 to 14 days prior to ripening on the plant. Hang the fruit in a shady, cool place to ripen, this allows development of better flavor than if allowed to ripen on the plant. Bananas may also be cooked and consumed when still green or when very ripe as is done with plantains.
I mentioned the different growing zones that they do well in. I am in Zone 8 and if we have a normal winter, (defining normal as, only a few cold nights) I can get fruit on my Ice Cream Banana.
Don't believe it, check it out 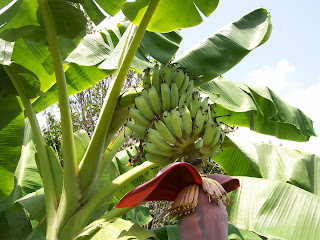 There are many, many cultivars and varieties out on the market, I encourage you to at least try one or more. If nothing else they will make a very tropical looking annual. If you want to try growing them in a container to protect them during the winter, look for Dwarf Cavendish, Dwarf Chinese, or Lady's Fingers.
As a closing shot, bananas are healthy for you and I strongly encourage you to eat some, but, did you know bananas are radioactive?
Yes, bananas are radioactive, but so are you. This comes from the fact that they contain relatively high amounts of potassium.  Specifically, they contain Potassium-40, which is a radioactive isotope of potassium. And, Yes, you will certainly die from radiation poisoning if you are able to eat 10,000,000 bananas at once. You may also witness chronic radiation poisoning symptoms if you eat 274 bananas a day for seven years.
That is a LOT of bananas!
As you may know, Spiderman got his superpowers because he was bitten by a radioactive spider. If I give my friend here (I call her Japonica) a huge amount of bananas, she is a banana spider after all, then have her bite me, do you suppose.....? 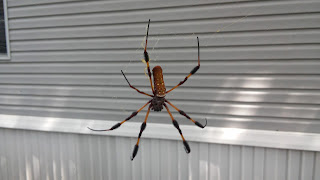 I hope you enjoyed going bananas with me, there is so much more to teach on this subject, I just couldn't fit it all in with this one article. If you have any questions about this, or any of my other articles, please feel free to comment below or send me an e-mail: TheCitrusGuy@netzero.com
Also, don't forget to follow me as The Citrus Guy on Facebook.
Happy Growing!
Darren
Posted by Darren at 12:34 PM 2 comments: