Happy Freekin New Year!
Mother nature apparently is NOT in the holiday spirit!
Charleston is going to get Cold, which means folks to my west and north are going to be even colder!! The Citrus will not be happy.
The past few days have been okay, lower 30's at night, so I was not worried. I looked at the next week or so and suddenly I was a little concerned. 28 is my "Take Action" forecasted low, I am looking down the barrel of 36-28-24-24-25-22-24-28. The highs will only peak into the upper 30's. The good news is, with the colder nights we have had, the citrus trees have had a chance to go into their semi-dormancy. The bad news is, that is too many nights in a row, NOT to take action. So I did just that this morning.
I also figured I would throw some tips out there for folks that might also get a little concerned about their Citrus.
The first thing you should do, while the temps are still decent is, Make Sure They Are Well Watered! A well-watered, hydrated plant can handle the cold much better than a dry one. This goes for in ground and container plants as well.
If they are in the ground, you might still have time, get some frost cloth. Check the big box stores, hardware stores, etc. My friend Stan McKenzie, up around the Florence SC area, is getting his in-ground trees ready. 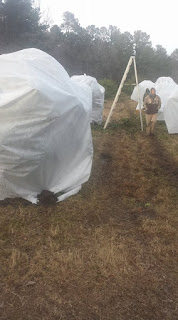 I have NEVER said growing citrus is easy!
You can also put some Christmas lights, the ones that get hot, or a couple of 100 watt light bulbs in there to help keep in some heat.
Now, those of us that grow them in containers have a few more options. I put what I could in my greenhouse, did they all fit, not a chance. My greenhouse stretcher is still in the developmental stage.
What did get put in there got watered to within an inch of its life, shoved together, and my little electric space heater is at the ready. As long as it keeps it at 32 or higher, I am happy. If you only have a couple of trees, I would suggest at least putting them in an unheated garage, storage shed or something along those lines to keep it a little warmer. If your tree is very small, and this can go for in-ground or container, flip a large trash can over it. The ground will help keep it a couple of degrees warmer.
What did I do with the ones that would not fit in the greenhouse?
There are a few that I gave some encouraging words to and told them they will be fine, which they should be, most of them are pretty cold hardy, down into the 20's type. The rest of them got laid down on the ground, overlapping each other, and covered with a tarp, a blanket, and some frost cloth. It ain't pretty, but it will work. 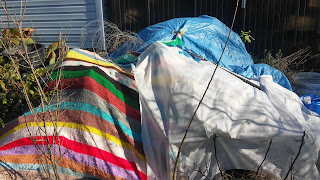 Again, I watered each one very well, tipped them over and covered.
Hopefully, this will be the worst we get all year and it will be here and done!
I mentioned it in my book, How To Grow Citrus Practically Anywhere

as well as above, I have never said growing citrus is easy, it all depends on how much work you are willing to put into it as to whether you can grow citrus practically anywhere!
If you have any questions about this or any of my other articles, please feel free to contact me via e-mail: TheCitrusGuy@netzero.com. You can also follow me on Facebook
Happy Growing!
Darren
Posted by Darren at 10:24 AM 2 comments:

I have stated before that there is a lot of misinformation on the Internet. I hear many of the same questions asked over and over again because the folks asking them saw something on a website and it freaked them out. So I figured, it was time to set some of the bad info straight on growing Citrus.
This is in no particular order.

#1- "A Citrus tree HAS to be grafted in order to produce fruit"-FALSE!
While a citrus tree that has been grafted will produce fruit faster than from seed, as long as the Scion came from a tree that is already producing fruit, it does NOT HAVE to be grafted. There are many trees that are on their own roots, which in some ways is better. You can easily root cuttings from a Citrus tree. The main reason being on its own roots is better, if the tree happens to get killed back by severe cold, it will come back as the same thing. If it has been grafted and gets killed to below the graft, the rootstock will come back and that could be a number of different things, most of which is rather untasty. Even Kumquats will grow on their own roots, some say not as well, I tend to disagree here, I have seen no real problems.
As a bonus tidbit of information here, the rootstock of a grafted tree will in no way affect the seeds of the fruit that it produces. The rootstock only effects the size of the tree, cold hardiness, and what kind of issues the roots might have to contend with, i.e Nematodes or Salt Intrusion. 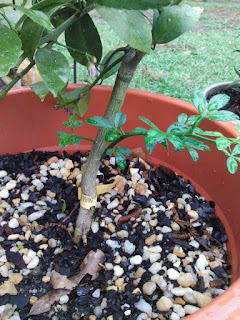 As you can see in this picture, the leaves in the upper part of the plant are large, normal looking leaves. The leaves that have three lobes towards the bottom is rootstock, some kind of Poncirus spp. starting to grow. Those should be cut off.

#2- "Citrus will not produce fruit if grown in a container"- FALSE!
If the tree is a rooted cutting or a grafted scion, and it came from a tree that is already bearing, it could be very small and produce fruit. The trees I have are ALL in containers, normally a minimum of a trade seven-gallon container, usually a trade 15 or 30 gallon. I have seen trees in a 3-gallon pot with one piece of fruit on it. Besides, don't ever say that to my Kumquat tree, it may get its feelings hurt. 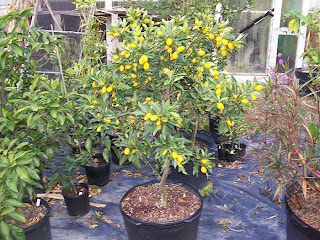 #3- "Citrus trees will die if the temperature gets below 40 degrees"-FALSE!
Citrus can handle down to 28 degrees for a short period of time, as long as they are allowed to go into a state of semi-dormancy. If the temperature has been very warm, say 50's and 60's and it drops suddenly to 32 degrees, it will get hurt much more than if the temps have been upper 30's and 40's than suddenly drops to 28 (or lower). It also has a lot to do with the duration of the cold, how healthy it was going into the cold event, and how well watered it was. A dry plant will suffer much more than a well-hydrated one. Want proof?

This is a Republic of Texas Orange, grown in a container, that was subjected to a low of 18 degrees. I watered it thoroughly the day of the cold event. 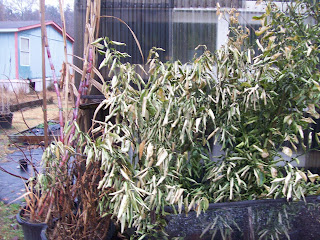 By most accounts, it would be considered dead, correct?

This is that same tree the following Summer. 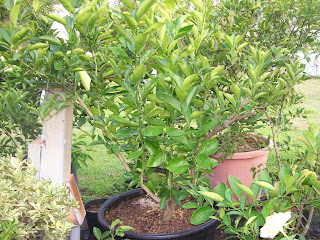 It did not produce fruit because it was putting all of the energy into leaf production. It is fine to this day.

#4- "Citrus trees will never produce fruit from seed"-FALSE!
Granted, it may feel like forever, but it will eventually produce fruit. Just some of the generalized timetables are:
Key Limes are your earliest producer from seed, averaging 2-3 years.
Your oranges, lemons, Persian limes, tangerines will be in the 5-7 year ballpark.
The grapefruit and pomelo will be the longest, taking anywhere from 8-12 years.
This will, of course, depend on how good your horticultural practices are. If you feed it, water it, and give it plenty of sunshine, you may be able to shave a few years off of these times. I was once given some seeds from a Lemonquat, a lemon kumquat hybrid, I actually saw one piece of fruit within 18 months. Granted it was probably just a fluke, but it is possible.

#5- "You need more than one Citrus tree to produce fruit"-FALSE!
As long as you have a tree that is flowering, it will produce fruit. Bees are your best pollinators, but, if you are growing Citrus inside, or there just does not seem to be many bees around, you will have to step in. Take a small artist paintbrush or Q-tip and dab from flower to flower. Basically, you are transferring pollen and fertilizing the flower. Just remember to buzz like a bee so you don't scare your tree. (The preceding statement was and is the only thing in this article that you should ignore)

And there you have it, 5 of the most common myths about growing citrus. Next time somebody mentions one of these, or you see it in print somewhere, call Buffalo Chips on them and send them to me! I will be glad to set them straight!
If you have any questions about this, any of my other articles, or maybe you have some kind of garden myth you would like debunked, drop me a line to TheCitrusGuy@netzero.com
Also, Don't forget to follow me on FACEBOOK
Happy Growing!
Darren

Pictures Tell It All

I got home from work today and realized that all of my Citrus (and Camellias), as well as everything else, had not been watered in over a week when we got an inch of rain. So, out I went to give them all a drink.
While doing so I realized just how good a citrus crop we had going on this year, so I snapped a few pictures. Keep in mind that all of my citrus are grown in containers. I mention that only because I used everything I have learned growing them that way when I wrote my book.


Here is what was ripe as of the writing of this article. 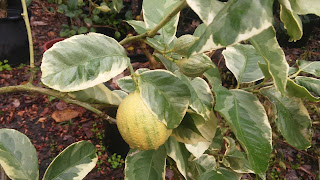 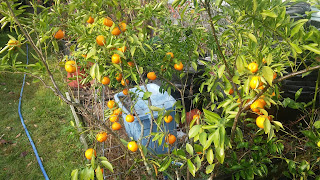 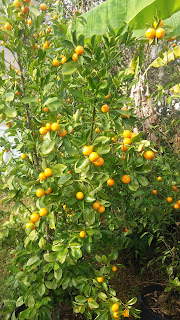 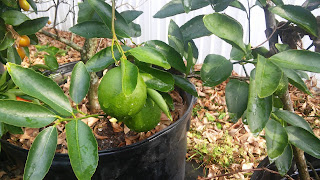 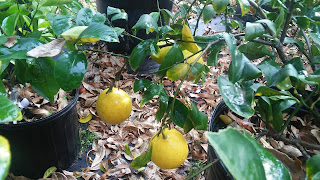 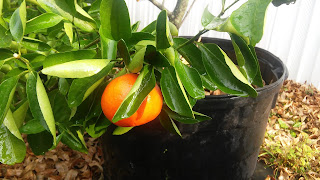 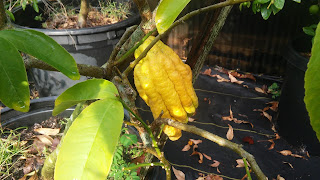 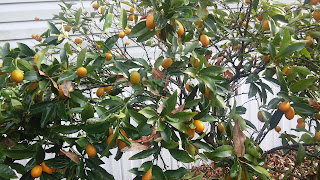 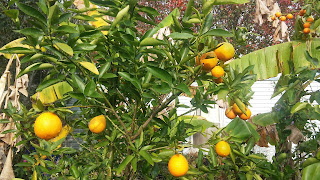 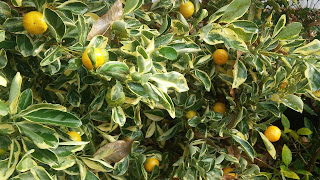 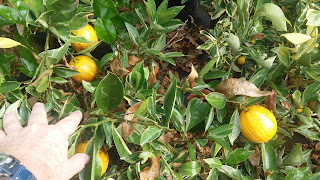 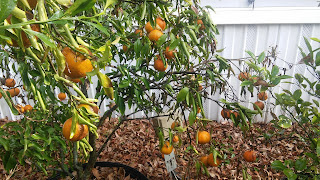 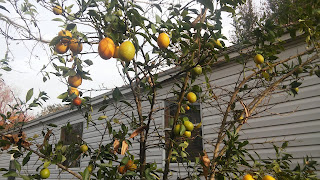 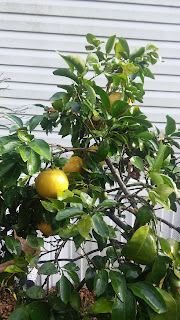 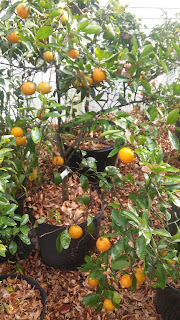 I hope you enjoyed this little pictorial of what can be done with citrus in containers. Just like everything else in life, anything can be done, if you put your mind to it.
If you have any questions about this or any of my other blog articles, please feel free to e-mail at TheCitrusGuy@netzero.com
You can also follow me on FACEBOOK
Happy Growing!
Darren
Posted by Darren at 5:11 PM 3 comments: