I was talking to a customer today about a plant that was in a container that just up and died. Being that it was a Sky Pencil Holly (Ilex crenata 'Sky Pencil'), I thought it was strange. These things are fairly resilient. So, I dug a little deeper, thinking maybe they were not watering it enough. Every other day, except when it rains was the response. So, I went the other way, does the pot have adequate drainage holes? Oh, no, there are no holes what so ever, so I put a layer of rocks on the bottom.
BINGO!
I proceeded to tell her that was a bad idea and more than likely is what killed the plant. She was going home to fix it. I can hear some of you now, I have been doing it for years and never had a problem. Well, either there is something else going on, you actually have some drainage holes, or have been extremely lucky! Let me explain why this is a bad idea.

To promote good drainage, the old advice has been to line the bottom of your pots with a coarse layer, such as gravel, stones or old broken pots. This is a practice known as crocking. Crocking was supposed to encourage water to pass down from the potting mix into the gaps in the coarse layer below and out through the drainage hole.

Sounds good so far, right? That is probably why so many folks still do it to this day. Yet soil scientists have known for years that crocking doesn't help drainage. In fact, it can hinder it.

I am not going to get ultra-physics on you, but suffice it to say that in the 1800's a man named Henry Darcy explained how water moves in the soil. He proved that before water will move from a fine-textured soil to a coarse-textured soil, the fine-textured stuff must first become saturated.

So, to give this a little more of a mental image, if you slowly pour water onto a fine-textured potting soil that sits atop a layer of gravel, the potting soil must be saturated before the water begins to drip. Granted, once the water hits the rock, it will quickly drain to the bottom of the pot, but the potting mixture above will still be saturated. Here lies the problem. Unless you keep putting water into the potting soil, that saturated soil will just sit there. Instead of extra water draining immediately into the gravel, the water ‘perches’ or gathers in the soil just above the gravel.

Here is a test to try, with a sponge and gravel. Take a big old sponge (this is your soil) and place it on some gravel.  Then pour water into the sponge. The water won’t run out into the gravel, or out of the pot, or anywhere until the sponge (soil) is saturated. Does the gravel make the sponge drain faster? No, the sponge fills up, and it won’t drip until it cannot hold another drop of water.

Now, you have this saturated soil sitting there, not going anyplace. If water pools around plant roots too long, they will starve for oxygen and then it will develop root rot which will damage and eventually kill the plant. 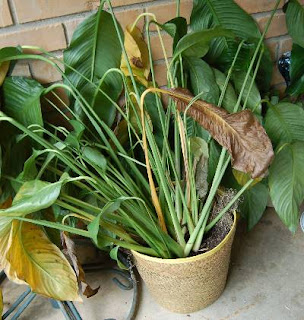 What is root rot?
Early symptoms include soft stems, usually near the base of the plant and moving upward. As the rot progresses, the plant may develop the smell of rotting plant material. If you remove the plant from the pot, the roots will feel soft and appear brown. Plants suffering from root rot wilt, with both new and old foliage drooping and dying. Usually the bottom leaves wilt first, followed by the rest of the foliage. Once most of the plant wilts, the problem has likely already killed the roots, and it's difficult to save the plant.

The cause of root rot is a fungus. Species of the Pythium, Phytophthora, Rhizoctonia, or Fusarium fungi are the usual culprits. These fungi thrive in wet soil, and the spores of these fungi remain dormant in the soil until the conditions become right for them to grow and spread to the plants.

Hopefully, I have convinced you by now, not to put rocks, gravels, or pot shards in the bottom of your pot. On top of everything else mentioned above, it makes your pot extra heavy.
What is that, you say? What about things like styrofoam peanuts or something similar?  Well, consider what you are actually doing by growing a plant in a pot, then adding something that it can not really grow in. The space is already so limited as you’re cramming that plant into a container and then you add a few inches of gravel, peanuts, etc. for drainage, what it does is reduces the volume of soil available to the plant roots. Basically, it means you make a pot even smaller in size and as a result get an unhappy crowded plant.
All of this should defeat the myth that refuses to die. Even though there is solid scientific evidence to the contrary, it seems that every book or website on container gardening recommends placing coarse material at the bottom of containers for drainage. Don't believe everything you read, unless it is from The Citrus Guy!
If you have any questions about this or any of my other articles, do not hesitate to send me an e-mail to TheCitrusGuy@netzero.com. Don't forget you can follow me on FACEBOOK or check out my WEBSITE for even more articles, pictures, and other things going on.
Happy Growing!
Darren