Over the past month or so, I have gotten SO MANY e-mails, I just have not been able to reply to all of them, I would have had to quit work! So, my apologies to those in Texas that have e-mailed me and I haven't responded.

More than likely, if you are reading this, you are from Texas and googled what to do for your poor citrus tree after the freeze in February. For those that are just reading this from other parts of the country/world, let me lay a little groundwork.

February, 2021-Texas: A record low temperature at Dallas-Fort Worth International Airport of −2 °F (−19 °C) on February 16 was the coldest in North Texas in 72 years.  While the damage is still being assessed, this will likely go down as the first billion-dollar disaster of 2021 globally, and potentially the most costly weather disaster for the state of Texas in history. (Excerpt from the National Weather Service) For another take on just how cold it was, Dallas had a high temperature of 22 degrees, 14, 18, 27 from Sunday, February 14th through, Wednesday, February 17th. 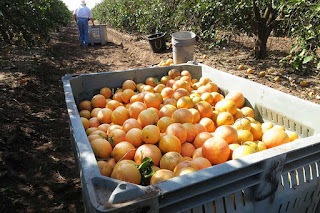 Image courtesy of Texas Farm Bureau
Okay, we have gotten the image, Texas produces a LOT of Citrus. The good news is, the current crop was pretty much picked and boxed when this nasty storm hit. So, the loss to the fruit was minimal, however, here is where the problem begins.
Texas is NOT accustomed to these kinds of temperatures, and citrus CERTAINLY isn't. There are many factors that will affect how cold citrus can handle.
How long the freeze is: One night of freeze may not hurt a plant too much, a week (or longer) could be another story.
The weather before the event: If you have had very cool temperatures and it has been rather consistent, that is a lot better than warm for a few days than a wicked cold spell.
Soil Moisture: Make sure plants are well watered before the event, the wind also falls under here. Cold and wind dry plants out. A dry plant is much more apt to be hurt by a freeze than a well-watered one.
As a general rule, Citrus can handle down to 28 degrees for a short period of time. This event was WELL below that threshold.
Ok, so what can be done in the aftermath. Sadly, from the e-mails that I have seen, there is not a lot.
Here are some of the pictures that I have received. 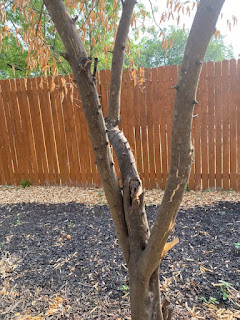 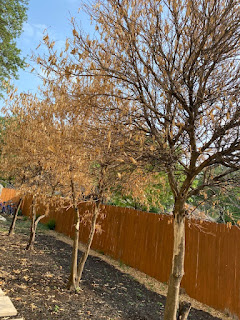 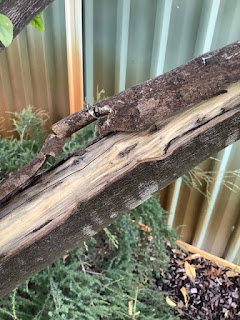 And, sadly, I have many, many more similar to these. What I have been telling folks, is to give it a little time to see if they start to branch back out. Most of the time, they have not even after all this time.
I have also advised starting as high as you can reach, scrape a tiny section of bark, if you see green under the bark, it is alive. If you see brown, go down a few inches and do it again. Keep going until you either see green or hit the soil line. If there is still no green, more than likely the tree is dead.
Now, do not remove the tree immediately!
Here is where there is still a little hope. IF the tree was growing on its own roots, then there is still the chance it will come back. You won't see any fruit for a few years, but the tree will still be alive. If you know what the leaves looked like BEFORE the storm, then watch for something like those. Hopefully, they will appear.
Now, some more bad/mixed news. If the leaves come back but look like this picture: 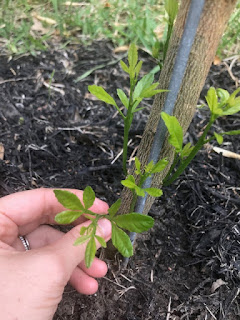 Then, it was a grafted tree. The bad news, the original is probably dead and what is coming back is a type of Poncirus spp. or hybrid. Edible, but not necessarily tasty. The mixed news is, if you know how to graft, now you have all kinds of rootstock available. Even if they do not have the trifoliate type look to them, it could still be a sour orange type rootstock, so, you may want to let it go and see what you get.
Again, my apologies for not being able to get to all of the e-mails. It has now been two months since this devastation, if you are not seeing green growth by now, it is probably a lost cause. I hate being the bearer of bad news, but this was truly a historical, nasty, cold event. My heart goes out to all of my fellow citrus growers, especially the ones that this storm has affected their lively hood!!
Good Luck!
If you get new trees or want to try grafting, Happy Growing!
Darren Sheriff
a.k.a. The Citrus Guy 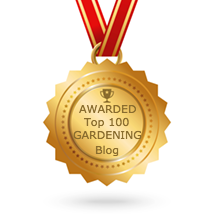